Quigley has an eRadio interview at The Free Market News Network

For you all interested, on Monday, 6/5/06, I should have an eRadio interview posted on The Free Market News Network which kindly publishes my essays. I talk about England's downward spiral as a nation state ("America's Gurkhas"), Fightin' Al Gore's misbegotten, misconceived and imperial vision (invasion of the Holy Roman Empire - Are we ready to take on the Russkie?), the June 13 Yearly Kos as a watershed event for the New Democrats, and thoughts on Fighting Dems, Mark Warner and Wesley Clark. - Quigley

For fun, here is an old essay I published on August 9, 1997 when Al Gore was Vice President. It came out in The Herald-Sun in Durham, NC, and is about NATO's expansion into Holy Roman Empire, which Gore championed. Essay was titled, "Helms May Carry Peace Mantle on Issue of NATO Expansion." How in the world can China be asked to restore freedom in Tibet when the moment the Soviets drop the curtain in Romania and Bulgania the Americans step in, nukes and all, armed to the teeth? 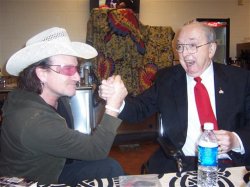 A few months back, the newspapers published a picture of Jesse Helms at a dinner of some kind, leaning over and conferring with the Dalai Lama. They looked like a couple of old pols from the good old days of the political machine, like-minded and agreeable, conferring on patronage or intra-party politics. (Reader: Tibetan Buddhists remember their friends from when they were alone in the world: The Three Celestial Ones back then were Helms, Claiborne Pell and Pat Moynihan.)

Readers nationwide must have wondered what the two men had in common besides a hatred of the Reds who conquered and occupied Tibet. I know I did. I didn't know Helms was so fond of Foreigners.

Although I have long admired the Dalai Lama for the peaceful approach to political problems that won him the Nobel Peace Prize, I have never quite thought of Helms as a peace monger. If anything, Bill Clinton has been tagged as the peacenik, at least by association, and in his youth he actively supported the peace movement during the war in Vietnam.

Now we have Helms sitting side by side with a Tibetan lama who more than anyone living in the world today deserves to be called a Man of Peace.

Perhaps it is not just political expediency. And perhaps something of the man of peace is beginning to rub off on the North Carolina senator. Recently Helms, along with 19 of his Senate colleagues, sent a letter to President Clinton asking him to clarify his posiiton on his proposal to expand the NATO alliance to include Poland, the Czech Republic and Hungary.

The senators wrote that they did not want to prejudge the merits of any potential new member of NATO or to express support or opposition to Clinton's proposal. They wanted to preview those matters that will be most contentious as the Senate debates NATO expansion.

The considerate tone of the letter and the thoughtful nature of the questions approach what the Dalai Lama and his fellow Tibetan Buddhists would call "mindful." This time, when the question is asked, "Who is on the side of peace?" we may be looking at Helms and company.

Consider the contents of the senators' letter. The first question it asks is, What is the military threat that NATO expansion is desinged to counter? It refers to the Communist threat to Europe at the end of World War II, when Europe was weak and beaten.

Now the Communist threat is gone, the Russians have established rudimentary democratic measures and embraced Western economic policies. (Reader: This in 1997. Alors, how times change.) Traditionally, when a war is over, the winning side demobilizes and sends its soldiers home to enjoy the peace and the war tax is repealed. Why is NATO expanding?

The letter states that under the new NATO agreement U.S. troops will be committed to respond to conflicts involving any of the new member nations of Central Europe. It asks, "Is a border involving one or several of the new NATO members so vital a national security threat to the U.S. that we are willing to risk American lives?"

The letter points out that the nations of Central Europe have a long history of border, ethnic, nationalist and religious disputes: "What would be the impact of extending coverage of the U.S. nuclear umbrella to them?" the letter states.

Another good question as it brings into the picture the terrible slaughter that has recently ended in Bosnia with a tenuous peace agreement.

And remember Quemoy and Matsu, the tiny islands in the Far East that China began shelling in a territorial dispute in 1954? The State Department and the military chiefs recommended to President Eisenhower the aggressive use of atom bombs against China to settle the "horrible business." Is Bill Clinton (and Vice President Al Gore, who vigourously endorsed this policy) recommending the same kind of strategy in Eastern Europe? Does a new NATO agreement damand such a strategy?

Finally, the senators ask if we are not creating an incentive for Moscow to withhold its support for further strategic arms reduction and perhaps even develop an early first use nuclear policy. At the moment, the letter points out, the current leadership inRussia is becoming reconcield to the likelihood of NATO expansion. But what of tomorrow's Russian leaders? (Reader: Again . . . how times change. Russian military spending will reach 800 million next year, growing in direct proportion to the decline of democratic sensibilities.)

These are all good questions. NATO is, after all, a war machine. In fact, it is a World War Machine which guarantees that any squabble among any of the traditionally contentious European and Central European peoples immediately escalates into a global conflict. By expanding NATO and arming its new members "to the teeth" as German Chancellor Helmut Kohl put it . . . advances the possibility of conflict.

Has the karma wheel turned, making Clinton (and Gore) - the peace advocate of the 1960s - and his foreign policy establishment the insidious aggressor and the instigator of war? It wouldn't be the first time such a turnaround has come about.

Perhaps the greatest was the change from Gen. Eisenhower to President Eisenhower. When the greatest general since Grant and Lee, the man who won the war against German fascism, left the presidency, he called the country to vigilance.

In the councils of government we should guard, said Eisenhower, against acquisition of unwarranted influence, "whether sought or unsought, by the military-industrial complex." The potential for the disastrous rise of misplaced power exists and will persist, he said.

Take nother for granted, Eisenhower warned in his farewell address to the nation. It is perhaps fitting that Susan Eisenhower, his granddaughter, calling the policy "a policy error of historic proportions" is leading the fight against NATO expansion.
Posted by Bernie Quigley at 3:56 AM

Your site is on top of my favourites - Great work I like it.
»

Your are Nice. And so is your site! Maybe you need some more pictures. Will return in the near future.
»