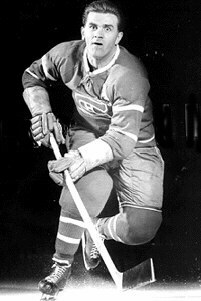 One of the interesting features of the North American continent is that at the very tippity top of the heavily populated regions, a river runs between the two original Canadian realms, and , forming a kind of natural yin/yang symbol. On the west side of the river in there is the feminine sphere, marked by a beautiful statue just above the bank of Queen Victoria, Earth Mother Incarnate and Empress of India. On the other side of the river in is a statue of Maurice Richard, known to all who have ever followed the game of hockey as The Rocket. The Rocket was the greatest hockey player who ever lived, but his importance transcends hockey. Decades ago, a fight broke out at a hockey game in which turned into a riot, which in turn turned into the Quebecois movement.

The Quebecois movement is generally despised outside of because it sometimes promotes secession from the confederation of . Other times it doesn’t. This is basically irrelevant to a citizen of like myself, but I live right close to the Canadian border and go there all the time and follow it closely. What I find interesting about the Bloc Quebecois is that it is the only regional group in which follows the vision of Thomas Jefferson to federalism. Every American state and every other Canadian province follows the Hamiltonian view, in which the states and regions have no identity and submit exclusively to a centralized bureaucracy. The Bloc Quebecois demands its own identity and its own democratic independence. It will participate in confederation with , but insists in doing so only on its own terms.

“In the beginning,” historian Frank Owsley wrote, “ . . . two men defined fundamental principles of the political philosophy of the two societies [America's North and South], Alexander Hamilton for the North and for the South. The one was extreme centralization, the other was extreme decentralization; the one was nationalistic and the other provincial; the first was called Federalism, the other State Rights.”

The hockey riot followed a penalty issued by English-speaking officials to the French-speaking hockey star. Afterwards, French-speaking refused to be dictated to by English-speaking , and demanded its own identity be kept intact. It demanded that provincial rights come before federal rights. As far as I can see, the only time the Quebecois movement actually wanted to secede from Canada was when English-speaking Canada began losing its own identity and slavishly followed in the wake of the United States as an imitation kind of America and a pseudo-America, most recently at the end of the Clinton administration when globalization of capital and culture was in full flower. There is always a natural tendency in for the English-speaking regions to do this. And in some important ways, the French-speaking parts provide a healthy reminder. The French pull back to themselves, telling them who they are and reminding them to be themselves.

In my experience French Quebec is not particularly anti-Canadian. Indeed, when Canadian Prime Minister Jean Chrétien opposed the in its invasion of , Bernard Landry, the head of the Bloc Quebecois, publicly embraced the Canadian government’s position. (A week after the invasion when only 100,000 marched against the invasion in , 200,000 marched in the French .) But anyone who visits often as I do will find that it is in no way anti-America either, and many on both sides of the border have friends and relatives on the other. But will not yield up its soul to either or the . This is the model of a as Jefferson envisioned a to be.

It has taken enormous backbone, innate soul and indigenous character to do this in this day and age when people like George Soros see all people in the world as Americans of a sort. To some degree he is right. Laotians are readily trading up Khrishna for Britney and Indians may complain about Americanization, but they fall in line just the same. That character came from the Rocket and the game of hockey. Hockey is to what the cult of the Samurai was to 16th Century . It is a character-building sport with a participation mystique which all Canadians participate in.

There is a national election coming up in next month and anti-Americanism has become au courant for the big-party candidates. Prime Minister Paul Martin held a news conference last week to say he wasn’t going to be pushed around by the Americans, although it wasn’t entirely clear what particular pushing was being done. But his polls went up and so the conservative candidate, Stephen Harper, who ordinarily would like Canada to be in lockstep with conservative America, held his own special news conference to say he was going to be tough on America as well, and would militarily fortify Canada’s Artic region lest an American ship slip through unnoticed. It got pretty humorous. The Bloc Quebecois candidate political leader, Gille Duceppe, seem characteristically calm and self-assured in comparison.

The Bloc Quebecois certainly does not represent all of the . But it can be said that neither the Bloc nor has the pseudo-American neurosis which afflicts English-speaking . It does not have to bash to firm up an insecure identity like 's - still holding hands with the Queen on the one hand and sending the most pitiful British soap operas on to the CBC to keep Canada British – but following ’s cue in almost every other way. Nor does it have to toady to .

Instead, there is an inner strength to life in which is symbolized by the statue of the Rocket. I saw a brief glimpse of it several years ago. When Hayley Wickenheiser led the Canadian woman’s hockey team to gold victory in the 2002 winter Olympics, head coach Daniele Sauvageau gathered the team around her after the victory for a final word on the virtues that would carry the women and their families through the difficult times in their lives. Huddled in a circle, she said three words to them: Responsibility, Determination and Courage.

This is the Rocket’s gift to , to and hopefully to all of .

Posted by Bernie Quigley at 4:27 AM

I just want to thank you for everything you wrote about Quebec.
Its good to read open mind american something.

Btw, america is a continent not a country :)

"George Soros see all people in the world as Americans of a sort."