The Hillary Illusion - How the Clintons could destroy the Democratic Party 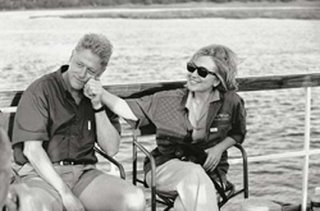 “Did you read Doonesbury yesterday?” my teen-age son asked with a snicker.

“I don’t read Doonesbury,” I said. “Its cynical and dark and leftover from the Sixties.”

That was a lot before bagels in the morning, but we all love each other here and understand each other. It is an ongoing discussion. He’s a thoughtful reader and a good writer. But as he gets one point of view in public school, he gets another at home. And we talk about this or that at each turn and with every book he brings home from English class. We talk about Willa Cather for example: With Willa Cather suicide is only a part of life and a part which leavens the spirit and strengthens the character of the living that remain on the Plains of frontier . And we talk about Salinger: With Salinger suicide is all of life.

But Willa Cather, who was considered perhaps the greatest American writer before World War II, is never on the English department’s agenda. (Why do women professors today hate Willa Cather? Because they were selected for their jobs by old men from the 1930s who hated the heartland, hated and hated women?)

The high school reading venue today generally consists of the suicide, the schizophrenic the maladjusted, the disassociated, the murderer, the alienated and the psychotic. Propose Cather to your kids’ high school English teacher or Principle and you will be met with a long pause and a stony silence, followed by Scubby Doo’s timeless response to life’s complexities: “Hummmphhh?”

I checked the newspaper and sure enough. Gary Trudeau’s Sunday strip was about a man receiving a bad prognosis from a doctor. The doctor asks, “Are you a Creationist?” Then he gives the Creationist a prescription that is “intelligently designed.” The point of course, is that Creationists are stupid, and yuppies that went to Yale to learn to write cartoons are oh-so-smart.

Walter Cronkite wrote an essay last year saying that he thought the weakness in the press today came from the fact that newspapers draw from Ivy League schools. Day Hops, no doubt. That pejorative distinction which Old School Elys and Harvard Blue Bloods understand. And make no mistake, the Bloods are keeping track.

There has always been something in Trudeau’s cartoon that says I went to Yale and you didn’t. I’m from the Sixties and you’re not. I’m a yuppie and you’re a Creationist. It is essentially a generational point of view in opposition to everyone in the world who isn’t from the Sixties. You can’t imagine that he’s from an actual place in the world like or (except Yale and that’s not really a place). He identifies only with the Sixties generation.

I myself am from the Sixties generation and I write of it all the time . . . of the frail and delicate avatar who spoke fleetingly of love and was gunned down in the streets of New York City; of the howling animal cries of mourning and celebration which came as if out of a river in northern Ontario and followed all the way down to Nashville; of the Monkey God who single-handedly changed fate and the flow of history by the simple act of switching from a wooden guitar to an electric guitar at a traditional music festival in Newport.

The Sixties was much like the Transcendentalist Movement here in . It brought forth the timeless and celestial bard, Ralph Waldo Emerson, and enriched ’s identity. But it often resembled George Ripley’s commune, Brooks Farm, in Roxbury, Massachusetts, of which Nathaniel Hawthorne, after living there for a year said, “A man’s soul may be buried and perish under a dungheap.”

As a political point of view Creationism grows not so much per its inherent intellectual properties but because plain folk from Willa Cather’s Nebraska refuse to be dictated to by some Day Hop from Yale whose entire life experience and identity consists of being a college kid in the Sixties and whose cartoon has from then to now featured one of the most despicable and poisonous characters of the Sixties, a nihilist drenched in drugs and doom, the late Hunter S. Thompson.

I enjoyed the Sixties a great deal, and even stopped at Haight-Ashbury during the Summer of Love, when I was in waiting for my plane ride to Than Son Nhut. But after that, and after college, I got a job I liked, raised a family and some sheep. And especially after my first child was born I never really thought that much about it again. But I am constantly amazed at the many my age that still do and continue throughout their lives, to relate to only that moment in their life here on earth and to that generation.

With most people, life goes on and takes over. I remember once or twice someone saying, “The Sixties is coming back.” But I always had the Scubby reply. Then when Bill Clinton suddenly arrived on the scene it really surfaced.

I’m not sure if they still have Trudeau’s shameful Fear and Loathing advocate and his pitiful little Maoist side-kick to further continue to alienate the Democrats from the real world, but the Democrats still have a Sixties problem and now they have a Clinton Problem.

Bill Clinton looks bad. They are putting him on the cover of supermarket tabloids again, this time asking, “What’s wrong with Bill Clinton?” “Is Bill Clinton Dying?” When you are a politician you’ve got to watch those papers. They tell you something you don’t get in the everyday press, but they do express what is really on people’s minds.

I don’t think he’s dying. I think he’s just bored. Now that he’s not President anymore he doesn’t have anything to do. From the beginning it was a mistake to move to and make all those appearances with Bono. Last summer he tried to start his own United Nations but the only people who covered the event was fashion writer Tina Brown.

In a way, the are an accident of history. They would never have found their way to public life and the Oval Office had it not been for the maverick Texan Ross Perot, pulling 12% and then 19% out of the body politic in two consecutive elections. In that, Bill Clinton’s credibility has always been an illusion, but it is an illusion which the Trudeau factor of his generation saw as a kind of salvation for the undergraduate point of view. But never had the votes and is not now and never was representative of enough Americans to pull a majority in a squared-away election.

This is still true. And it is more so with Hillary, as Hillary is merely an extension of Bill Clinton, Clintonism, and the generational aspect of politics that they represent.

Yet the Democratic rank and file love Hillary and so do the media. I can only think that this is because they are all leftovers from the Sixties. That is where they go. This is what they do.

Last year, the day after John Kerry got the Democratic nomination, The New York Times ran an op-ed saying he should announce Bill Clinton as his vice president. It showed how out-of-touch with reality even the most prestigious newspaper is in regard to the .

Today it is becoming the widely accepted fallacy that Hillary (Billary) is the front runner in Democratic politics. Yet there is nothing which presents Hillary Clinton as a reasonable candidate for the Presidency except the shrillness of her voice. That voice was first heard famously as valedictorian of her class at in the 1960s. It is the voice only of her generation.

The Democrats exhibited a serious problem in the last two elections when they could not bring up candidates able to beat an accomplished incompetent like George W. Bush. Next time they will be running instead against someone vastly competent. Mitt Romney of Massachusetts, perhaps. Or someone vastly popular, admired and respected, like John McCain. If they couldn’t beat young Bush with their tired slate of old candidates, how do they think they will beat a great candidate like Mitt Romney?

Bill and the cartel (featuring James Carville) are attempting to rescript Hillary, and the results resound with humorous inauthenticity. She has always been scripted, but this is ridiculous. Hillary we are told is a regular Methodist from the Mid-West, prodigy of John Wesley. A regular bible-thumper. Do they really think this will play in ?

Recently, they’ve got her pitching an anti-flag burning amendment and its freaking out the Howard Dean crowd up here in the mountains in . Now she’s the anti-Sixties candidate. A regular Okie from , just kickin’ hippies asses and raising hell.

This is absurd. Each time they attempt to send her forth as a Bible Belter from they lose their generational constituents. And at each new reconstruction of Hillary and themselves, the Democrats lose more credibility.

Tom DeLay and Newt Gingrich both admitted to shock when the Democrats sent Howard Dean up to run the party. Gingrich said he thought the Democrats had a death wish.

In fact, “the ” (Bill, Hillary, James Carville) were pushing Wes Clark for the job and I think he would have been great for the job and might have begun to restore the Democrats to public health.

Bill’s vision has always been greater than his generation’s, but his generation only wants him as a generational figure, like Hunter Thompson or his buddy Mick Jagger. That’s the problem he faces. He is not really one of them/one of us. But that’s what they want of him. And Bill’s vision now regarding Iraq, for example (and Hillary’s later) is essentially the wise and practical solution hatched in the most creative and versatile mind of Wes Clark.

But if that message is delivered by Hillary, no one will buy it. The Democrats have already had a wide-open opportunity to choose Wes Clark and they chose instead Howard Dean. Hillary is essentially a career extender for a husband who refuses to leave the building. She cannot be both built as a new centrist from the heartland and a generational figure.

The appointment of Dean as party chief points in the direction of a fatal journey for the Democrats and Hillary stands at the bow of the boat. Twice in the last 30 years the Democrats have mindlessly placed themselves in positions that made them feel superior and sent candidates forth to certain death, satisfied by smugness. In essence, this is politics. That is, it is a retreat from social responsibility.

They bring to mind a little lyric by the bittersweet and popular poet from the Sixties, Jean Sheppard: Mindless we laughed, mindless we loved and mindless at last we died.

If the Democrats don’t let go of the and move on, it will be their epitaph.

Posted by Bernie Quigley at 2:38 AM

Interesting thoughts. I am having trouble classifying your political preference, but I suppose that is a sign of a writer who actuall thinks.

Your comments make me miss bagels and cream cheese (I've been here in India and Nepal 2 years. They have them in Kathmandu, but nowhere else.)