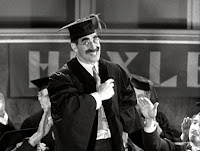 That Supreme Court Justice Elena Kagan emailed Harvard’s Laurence Tribe to say, “I hear they have the votes, Larry!! Simply Amazing” on the day the House passed the Patient Protection and Affordable Care Act, will come as no surprise. They are all friends. Like Charlie Sheen, like Lady Gaga, like Hillary and Barack, Larry and Elena are symptoms of an endgame. The right thing to do; the noble and moral thing, is to ignore them entirely.

The “occupy” activists are best ignored as well. They might be considered the spiritual children of Professor Rufus T. Firefly who in that Sixties cult classic, Duck Soup, declared: “Whatever it is, I’m against it!” Marxist? No. Groucho Marxist, maybe.

“Most of the tents were expected to be gone from City Hall Park by late yesterday after ’Occupy Burlington’ protesters have had a chance to pick up their belongings,” my local paper reports, “but some of the tents will be left for the city to clean up as part of the protest, police say.”

Part of the protest? Who do they think will clean their crap up, when they are taking the Amtrak back to Yale and Brooklyn Heights? The nameless proles who wash the clothes of these dilettante children and cook their food and clean their toilets. The huddled masses. Like the bent and elderly Indian woman just arrived, still with a bindi on her forehead, who cheerfully changed my hotel sheets yesterday.

The persona of Occupy today is the mask of Guy Fawkes, who might be considered the father of modern terrorism. But that was never really forgotten by the protesters because it was never learned. It was seen in the movie , V for Vendetta, produced by the Wachowski brothers, a shadow event which followed their masterpiece, The Matrix, featuring Keanu Reeves, as Neo, who might be considered the ‘savior’; the agent of Aquarius rising. As if when the spirit of the night’s unconscious – known as The Self in the Upanishads, Morpheus to Neo - asked the key question to the apprentice holy man; to take the leap of intuition and choose a pill - the red one or the blue one. The one would lead to Awakening and the other to the shadow path. Occupy took the other pill and became an advertising supplement for a movement or something but they can't remember what.
Posted by Bernie Quigley at 5:43 AM