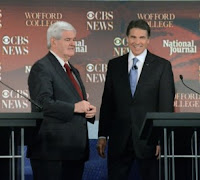 Newt the Munificent and his feisty gunslinger sidekick, Rick the Impetuous

Something funny happened at the last debate. I started to like them. With some thanks to CBS moderator Scott Pelley and National Journal’s Major Garrett, they developed tempo, drama, intrigue. I’m looking forward to the others now as I’d look forward to a hockey game or a favorite TV show. First time for that. This will now be a season of debates and debates this time will determine the next President.

When Rick Perry said he didn’t think the American people would choose “the best debater” for President he was making a conceptual error. Better to look to the record and experience of the contender. When the pundits said that this year there were “too many debates” they spoke too soon. Too much nonsense had come in and secondary players were taking the initiative. It presented an “American Idol” pop culture. But now it’s starting to get good.

I can’t wait to see what Newt comes up with next time. He is by far the best debater here and in the past two weeks he has made the debates interesting, dramatic, exciting.

All along it had been Newt Gingrich’s secret weapon. Now he has found momentum. Dorothy Rabinowitz of the Wall Street Journal gave him a sterling endorsement recently and the mainstream MSM gave him a second look. Newt is outside the box and is now bringing it to the people with him. It may be the “Rabinowitz effect” but he is now right up there with Mitt Romney in the ratings.

Romney better watch out. Newt’s debating kung fu is stronger and Newt’s skill in this is more valuable this year than Romney’s money. Romney seems studied and defaults to Heritage Foundation power points which kills the mojo on TV, while Newt, the creative introvert, suddenly swings his arms and comes up with some startling, radically new thinking for the audience. How about cyber warfare and targeting enemy scientists who work on nuclear weapons? Like poison them. All under the cloak of deniability. What do you think about that? How’s that for outside the box? And pretty good TV.

And Rick Perry is getting the swing of it. His Opps! gaff gave him a pretty good week in hindsight. The country learned that he is a pretty likeable guy. He’s got more money than the others except Romney so he can hang in there a long time. And Gingrich likes him. They are developing new sympathies and fresh personae via the TV debates: Newt the Munificent and his feisty gunslinger sidekick, Rick the Impetuous. This moves along from TV experience as well, from the relationships that evolve from the weekly drama.

But these two have long been two peas in a pod. Gingrich wrote the foreword to Perry’s recent book, “Fed Up! Our Fight to Save America from Washington.” “Rick Perry, Texas governor, for the past decade, is uniquely qualified to offer a firsthand perspective on why the United States – the most successful civilization in human history – is being threatened with economic collapse,” he writes.

A group may be forming here; Gingrich’s and Perry’s wives are hanging together with Jon Huntsman’s. Could bring a whole new agenda, a whole new American beginning.
Posted by Bernie Quigley at 1:33 PM