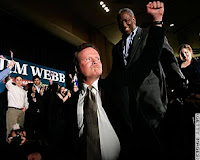 Jim Webb: OWS needs a warrior and so does America

MSM, seeking to frame OWS in context, brings some unfortunate editing. The hardships these kids suffered – one lost his computer cable – and comparisons to the Civil Rights movement exhibit inexperienced and youthful prose selections which poorly represent a rising generation. But there is here the feeling of a movement striving for a voice. A feeling that something is wrong; a dread, but it is not clear what the source is. It seems has been wrong for a long time – most of these young people’s lives - and wrong at the center. In the last debate for example, at least three Republicans announced that they willfully support the use of torture. It is not that they shouldn’t be elected. They should be sent into exile.

But Jim Webb, senator from Virginia, had been speaking out against the sources of this creepy and insidious anguish from the beginning of the war on Iraq. Sadly, this great and creative man who has served America in heroic capacity and in so many ways, will not be running for reelection. I hope he runs for governor of Virginia. Actually I’d like to see him run for President right now on an emergency ticket maybe with Elizabeth Warren. Outside the box, but that has never stopped Jim before.

The uncertainty surrounding OWS suggests the leader has not been found to vocalize their distress and desire. I wish they were around when Webb gave the Democrats’ response to President George W. Bush’s state of the Union in 2007. It was shocking and strange to the penguin-like conformist of the time. The reference to “Wall Street robber barons” sent a chill up Wall Street’s spine. It seems a perfect match today for a rising generation still at a loss for words and still seeking an adult worthy of its trust. It can be heard on Youtube under the title “Senator Jim Webb Responds to the President.” Here are some excerpts:

“The stock market is at an all time high and so are corporate profits but these benefits are not being fairly shared. When I graduated from college, the average corporate CEO made 20 times what the average worker did. Today, it is more than 400 times. In other words it takes the average worker more than a year to make the money that his or her boss makes in one day . . .

“In the early days of our Republic, President Andrew Jackson established an important principle of American style democracy; that we should measure the health of our society not at its apex but at its base not with the numbers that come out of Wall Street but in the living conditions on Main Street . . .

“With respect to foreign policy this country has patiently endured a mismanaged war for nearly four years. Many, including myself, warned even before the war began that it was unnecessary and that it would take our energy away from the larger war against terrorism . . .

“Regarding the economic imbalance in our country I’m reminded of the situation president Theodore Roosevelt faced in the early days of the 20th century. America was then, as now, drifting apart along class lines. The so-called robber barons were unapologetically raking in huge percentage of the national wealth. The dispossessed workers at the bottom were threatening revolt . . .
Posted by Bernie Quigley at 4:12 PM