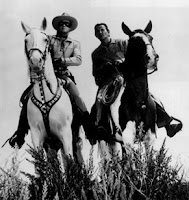 WSJ editor James Freeman writes yesterday: “A Republican campaign veteran tells us that Texas Governor Rick Perry has decided to run for President, though the official word from Team Perry is still a definite maybe.”

“Conservatives are reaching a fork in the road; a split between the small government trend which took its initiative with Ronald Reagan, and more traditional conservatives like H.W. Bush with sensibilities formed in the Northeast . . .

“[There] is the fork in the road for conservatives and each trail now has a premise and a tradition. Soon each will have its own leader. The moderate, Eastern conservatives like Colin Powell and Peggy Noonan will call for Jeb or somebody just like him with hopes of following in the tradition of Father George. But a new path is growing here . . . . The natural leader for this new direction is Rick Perry, Governor of Texas.

“Here he is with [then South Carolina Governor] Sanford in a recent Wall Street Journal op-ed: As governors and citizens, we've grown increasingly concerned over the past weeks as Washington has thrown bailout after bailout at the national economy with little to show for it . . . In the process, the federal government is not only burying future generations under mountains of debt. It is also taking our country in a very dangerous direction -- toward a ‘bailout mentality’ where we look to government rather than ourselves for solutions. We're asking other governors from both sides of the political aisle to join with us in opposing further federal bailout intervention for three reasons. First, we're crossing the Rubicon with regard to debt.

“Americans phoned and emailed into Congress ten to one in opposition to the Wall Street bailout first proposed by Hank Paulson. Neither party in power spoke to that group. Sanford and Perry do and if this is an awakening constituency, we too will have crossed a river; the Mississippi, like Davy Crockett, on his way to the Alamo . . . “
Posted by Bernie Quigley at 2:01 AM