Jon Huntsman Jr. is our own Dr. Carlisle Cullen

When two separate events occur simultaneously pertaining to the same object of inquiry, we must always pay strict attention, FBI Special Agent Dale Cooper advises. So for a minute there watching the clip of the most elegant and handsome Jon Huntsman, Jr. it was like that de ja vu thing all over again which Yogi Berra talked about. I thought I was back in the movie theater with my 13-year old daughter watching “Twilight.” Out of the mystery and danger; out of chaos, blood lust and barbarism, comes the handsome, young, dependable and strong father figure, Dr. Carlisle Cullen, who brings us back to order. A stunning figure, Huntsman/Cullen, but not really one of us. One who was one of us, but evolved beyond his bestial nature to a higher form; a celestial one, but one who was led back to us by compassion; back to us mere mortals who are still driven by the beast, come to us now to help us along, to guide us, to cure us. That is Carlisle, the Cullen patriarch, and that could well describe Joseph Smith, who led a small group out of the utter moral and spiritual confusion of 1830s Vermont, to a structured new enlightenment in the desert of Utah. And now, Huntsman comes out of exile and brings it back to us. 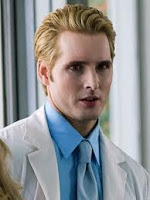 Huntsman is picture perfect and could well play Dr. Carlisle Cullen, father of the “good” vampires in the “Twilight” saga, and maybe for the first time in the post-war saga we can say that populism has failed us and has failed the world. Huntsman/Cullen is not “one of us.” He is better than us. And now, here because we need him, because if we continue along the populist path we will not only fail – we have already failed; no, this time we will fall apart. But maybe Jon Huntsman, Jr. can save us.

It is serendipitous that the movie version of the fourth and final book in the “Twilight” series, “Breaking Dawn,” which sold 1.3 million in the first 24 hours, will be released on November 18, 2011, when the campaign is in full swing. Because the connection between Jon Huntsman, Jr. and Dr. Carlisle Cullen in looks and personality can be mesmerizing.

The books and movies were at first met with denial. Possibly because the vampires in this series are not bad, they are good and they are better than the humans. They are angels or “gods” and have risen to a greater nature than that of the everyday pudknockers of Forks, Washington. And these books appeared as a dream in the heart of a Mormon novelist, Stephanie Meyer, who learned to write, she said, to get it all down. They are not “Mormon books” and work ethic, discipline, a moral life and compassionate commitment, a commitment to becoming better are not exclusively moral values. But they are Cullen values and they are the values of Jon Huntsman, Jr.
In the four books a mythic marriage takes place. It is an American creation myth incorporating Native American heart with Mormon moral order. It bring in myth the return of the “white queen” – the chess figure on the cover of the last book; that is, it brings the white queen, Bella, to victory over the red queen, who’s name happens to be Victoria. This begins the historic cycle of the English-speaking people described by mythologist Robert Graves back to its beginning, and in that regard, it is an American “creation myth.”
It should be interesting. Maybe that is why they don’t like Mormons. They are intelligent, they are compassionate and they are better than us who have not yet conquered the beast.
Posted by Bernie Quigley at 11:07 AM