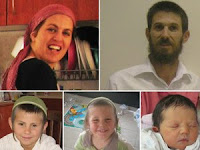 Waiting for Dorothy: The unbearable quiet of Hadas Fogel

As Yoav, 11, Elad, 4, and their parents Ruth and Udi Fogel were stabbed to death by terrorists in their home in Itamar, and three-month-old Hadas who had her throat slashed, France’s Sarko urged Obama to open fire on Kadafi. These were parallel events although we on the far perimeter of the world’s four corners may not have noticed what was going on in the center of the world. Nor did we notice when Palestinian militants in Gaza fired in 50 mortar shells into Israel on Saturday, the heaviest barrage in two years.

“Slaughter of a sleeping baby is unacceptable as a tool in the struggle for any type of liberation. It comes from a dark place, from a place that simply wants to destroy you,” said Moshe Feiglin, an Israeli leader who wants Israel to turn “the state for Jews” into a “Jewish state.”

In Washington, the Shaman King was ruminating at length and with astonishing detail, in a full court press about March Madness, which incidentally, foreign readers should understand, is not about rabbits but about basketball.

It was different this time around. Foreign Minister Dominique de Villepin last time led opposition to the invasion on behalf of France while Colin Powell lied outright to the UN on behalf of George W. Bush and Vice President Dick Cheney. This time there will be no lies and presumably no torture and repeal of habeas corpus. So something must have happened since then.

When he first entered office, Sarko actually came up here to New Hampshire to vacation on Lake Winnipesaukee, a purely symbolic vacation spot full of beer cans and Boston boaters and summer rentals for politicians who see our state motto, Live Free or Die, as an anthem. His wife was so bored she went back to Paris after one day and filed for divorce.

Sarko wanted then to tell us that although they opposed, the French were not cowards. And so do the liberals this time around who urged this war on Kaddafi. And Kaddafi has none of the Nazi-era swagger that Saddam had and is such a stupid looking man that he seems an easy target to those who wait timorously on the margins, waiting for Dorothy to give them courage.

It is a shadow event; an event that follows, like a shadow; the Rolling Stones to the Beatles, Emily Brontë to Charlotte Brontë, as the dark will follow the power, like a shadow follows a person walking in the light. Liberals in America want to show that they, like France, are not cowards too. But following shows neither courage nor cowardice: It is marketing; the safe repackaging of an idea already awakened by somebody else.

Now there are two approaches. From a conservative Republican perspective it is a defense of Israel; the center of the world for Catholics, Protestants, Orthodox and Islam; the four-cornered castle from which the west morphed out of barbarianism in the past 2,000 years. The non-ideological American heartland; those folksy red state Tea Party types who are not the least bit Europeanized, see that actually more clearly; they support Israel in the heart and not the head and that is more dependable.

But For Secretary of State Hillary Clinton, who wanted this war when Obama did not, it is not about that at all. It is about Bill because it is always about Bill and can never be about anything else. It is about restoring the world to what it was like in the 1990s, before 9/11, to what was envisioned Bill’s “global initiative.” That is, a vision of the world in which Bill was the center and Israel was an archaic interference.
Posted by Bernie Quigley at 6:07 AM