The several elements in Tolkien’s “Lord of the Rings” suggest restoration of Temple Mount. The Towers, the Golem. As I have been writing along here and in Quigley in Exile, Golem, from Rabbi Loeb’s dream of Golem in the 1600s marked the "end of light” in Europe – European and world Jews would then bifurcate to Extroverts, who would move outward with the gentiles in commerce and banking, and Introverts who would then move inward; that is, back to Israel. This would be the beginning of The Return. Golem would mark the external path to the present day in pop culture: Find Quaternities in pop culture and the “son” figure is frequently Golem – traces of this in Seinfeld where George is “son” (Seinfeld father, Cosmo Trickster, etc.), all neurotic and unable. No karma left at end of Pisces. The Twin Towers - Tolkien's second book - caused concern here because when the movie was released and the twin trade centers in New York were destroyed as parallel event, as if we were on a “gateway” to the age – the Age of Aquarius opened in 2001, year of the Twin Towers 9/11 tragedy. The subtheme in this story is the death of Golem; the end of the dark (shadow) aspect of the Jewish Extravert trail (which Moshe Feiglin scorns today in his weekly newslette). That is matched by the “Return of the King.” We shift today to the positive karma and suggest, in Templar terms, the rise again of Temple Mount. And it is what we hear again today & what I’ve been writing about these past months. I had been thinking it had different reference, but as Golem is in essence a Jewish reference,l the counterpart, King, likely implies the rise of Israel.

This image of the "Fantastic 4" in the naive culture is characteristic of a Quaternity featuring Golem as "Son." As I understand it, Stan Lee, who did this and most of the "super heroes" was a Jewish immigrant to New York. This would suggest a quest for Self which new (maybe all) Americans feel when they leave their "gods" (archetypes) behind in Europe. Golem's name here is "Ben" - Hebrew for "Son." This is a classic Quaternity: Father, Son, Trickster (fire boy), and Psyche (sister to "fire boy."). Quaternity is common in pop culture, "The Wizard of Oz" being most representative of American karma, born of the Plains. But "Seinfeld" and "Frazier" are telling Quaternities as well. 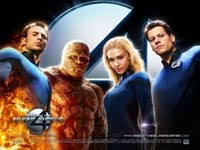 Posted by Bernie Quigley at 3:33 PM