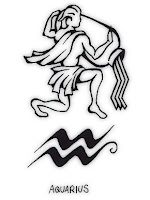 The end of "Lost" - Jack Shephard is the Aquarian

As per the earlier theme of shifting the "time style" from Pisces to Aquarius, the interior story ends with Jack at the light/fountain (Self) in the center of the island repairing the karma by replacing he sacred stone - much as John Locke repaired the "time style" when Ben broke it. The water pours forth. Jack is the Waterpourer; the iconic figure in the symbol of Aquarius in the zodiac pouring water from a vase; freeing the creative consciousness for the new millenia. Nice at the end the eye closes; like Khrishna going back to sleep at the end of Maharabarata. That figure - Waterpourer - is known as the Titan.
Posted by Bernie Quigley at 4:31 AM

I thought it was a great finale. Thanks for all your insights into the show, Bernie!