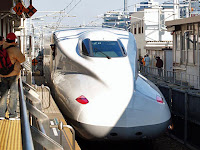 Tom Friedman has some good ideas. He wants us to wake up, reboot, get going. He’s been at it for months, years, now. We need his energy, his maturity and his perspective.

In a column this week he talks about riding a state-of-the-art fast train across China, then arriving home to the waste land of Penn Station in New York and heading south on the broken trail to D.C.

We need fast trains and new cars. But to get these new things we need a fresh start. And instead of looking north to south, from New York to D.C., we might have better luck looking east to west; traveling, like Frasier, from Boston to Seattle. We could make new friends across the way in Canada.

Canada is our best friend on earth. More like a sister. As novelist Robertson Davies said, Canada is the introverted aspect of our own extraverted nature. And if any of y’all were ever forced through TQM management seminars you would have found that the creative awakenings in the organization comes from the introverts.

Canada is also like a filter: It takes from us our best aspects and discards the worst.

With help from our friends in the Great White North fast trains would be a practical and convenient way to get from place to place and even coast to coast. I live exactly mid way between Montreal and Boston. For us, who spend time in both, it seems an odd disconnect from most other Americans who see an impenetrable brick wall on our northern border. When we lived in Michigan years back a neighbor described the area as bordered in the north by the blissful tundra of the Upper Peninsula. What’s above, I asked. Nothing, she said, meaning Canada. For most North Americans, Canada is the undiscovered country.

One difference in Canada is that there is a lot of empty space between cities and major living places. When you leave Quebec City, the next major stop is Montreal, two hours away. Then Ottawa and Toronto, both hours away with little in between. And when you head west there is even more space; native environment for a fast train.

As Friedman has pointed out in past essays these past few years, we are living on borrowed money and that money is borrowed from China. Our economic boom of recent times has little to show for it but oversized SUVs and tacky MacMansions; empty wrappers with plummeting resale value. Other economic booms have left something behind; railroads, TV, computers, roads, but we are seeing little but waste for our profligate spending. Other booms have been financed abroad. As a comprehensive article on China trade in today’s New York Times points out, the railroads were financed last century by Britain.

Economic reality in our time comes via the Pacific with China, and historian Niall Ferguson refers to our current economic condition as Chimerica, a singular economic union between America and China. But much of the cash goes to Canada as well and British Columbia has become a major destination for Chinese immigrants and high end cash.

We in the west are turning east. Here near the top we have found that it is much easier to get to western destinations by driving an hour north across the Canadian border. You can make it to Detroit in a day with a few pleasant stops at Tim Horton’s. By fast train it would be a lot shorter. To Vancouver as well, dropping down then to Seattle. And all along the line, from California to British Columbia, then across to Quebec and down to Massachusetts and New York, are premiers and governors and mayors like Arnold Schwarzenegger and Mike Bloomberg who have much sympathy with ideas of green travel and trade where authorities in other states might oppose.

Where would the money come from? China. Where it is coming from now. And as a joint venture between the U.S. and Canada. It would be a practical destination for some of Obama’s infrastructure and bailout money and unlike many of the simply pork projects proposed by local mayors, it would apply cash to relevant and well needed public works.

Our economic reality is that more trade in our new century will cross the Pacific than the Atlantic. And the action and passion economy brings with it will awaken places like San Francisco, Seattle and Vancouver, just as the Atlantic transit did Boston, Philadelphia and New York in the 1800s.

It may be an ugly development of global warming that trade and commerce will also start traveling across the pole in the near future, but it is a fact of life which will demand new security arrangements between the United States and Canada in a dangerous world. Russia’s new interests in the artic should also bring America and Canada closer together and engender a greater North American cultural sensibility, especially with the northern states. Americans gain everything by a closer friendship with Canada and closer relations may soon be a practical necessity for both of us.

A number of Canadians are already as hot on fast trains as Friedman is, due to the existence of a functioning Greens Party in Canada.

“If we had access to Canadian-made Bombardier trains that people do in China and Spain and other advanced countries … the trip from coast to coast would be 18 hours instead of five days,” says Elizabeth May of the Canadian Green Party.

But for Americans to go in on something like this, Canada needs to be demystified. We’d have to learn to understand why a Canadian woman, lost in a snow bank for three days, first apologizes to rescue workers who dig her out. We’d have to learn to understand why grown men tear up at the thought of Dougie Gilmore, a 40-year-old hockey player, crawling off the ice on his hands and knees in his final game.

We’d have to learn about loons, canoes, Don Cherry and The Rocket.

Canada is vast and beautiful and strong. For myself, finding Canada has been like finding something in myself I left behind long ago. It was good to get it back.
Posted by Bernie Quigley at 10:41 AM