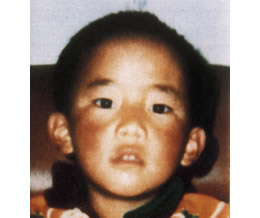 Where is the Panchen Lama? Letter to Jim Leach, R-Iowa and Tom Lantos, D- California

Reps. Leach and Lantos: The hearings on the collaboration of high-tech American companies with the repressive Chinese government move in the direction of responsible corporate management and fair trade and are a welcome step in the right direction. The fate of journalist Shi Tao and his family is particularly important. The fate of the Panchen Lama should be considered as well. FYI, my essay from The Free Market News Network calling for an investigation into the fate of the Panchen Lama. All trade and commerce should be put in limbo until these issues are cleared up.

Send the Panchen Lama to My House

In November, my son and I had the opportunity to hear an address by the Dalai Lama in I was pleased at that time that President Bush greeted him warmly and welcomed him in the Yellow Oval Room. Religious freedom in and should be key to our good relations with , and the President showed backbone in not backing down to secondary pressures, as more timid incumbents have usually done in the past. There is, however, a grave issue which remains unresolved and all trade and all

relationships moving forward with should pend on this issue. Is the fate of the Panchen Lama, the boy monk who in the Tibetan tradition is seen to be a highly regarded religious leader, just lower in status than the Dalai Lama.

This child has disappeared. But you will not see his picture posted on the side of milk cartons. Nor do headlines pour forth from the excitable TV press as they should. Instead there is a small web site (freepanchenlama.org) put together by Tibetan Buddhists sent to exile by the Chinese and a few of their new friends in the West. It tells the story in brief: Gedhun Choekyi Nyima was recognized at age six by His Holiness the Dalai Lama as one of 's most important religious leaders. Determined to control religion in , the Chinese authorities kidnapped this young boy and his family on May 17, 1995 just days after he was recognized as the 11th Panchen Lama.

Despite repeated appeals to gain access to him, no international agency or human rights organization has been granted contact with the young Panchen Lama or his family. To date, their well-being and whereabouts remain unconfirmed.

This is a tragic situation, not only to Tibetan Buddhists, but to all freedom-loving people who wish fair play and good business and commerce practices to advance between East and West.

The International Campaign for says that on September 30, 2005, the UN Committee on the Rights of the Child called upon the Chinese authorities to allow an independent body to verify the well-being of the Panchen Lama, who is now 16 years old. It did receive some information from the Chinese but was not able to have this information confirmed by an independent expert. The Committee then asked that the Chinese authority “allow an independent expert to visit and confirm the well-being of Gedhun Choekyi Nyima while respecting his right to privacy, and that of his parents.”

It is good that the UN is looking into this case, but I don’t have my hopes up. There are other strategies. The fate of the Panchen Lama should be a key element in the platform of both major political parties and foremost in the Libertarian Party’s, and all trade issues should be linked to the successful and happy conclusion of this dilemma. Paste the Panchen Lama’s face on every piece of sewed cloth that enters port from . Place with it a warning label like those which appear on cigarettes: “Warning: The Purchase of This Product is Dangerous to the Health of Child Monks and Detrimental to the Practice of Religious Freedom and Contrary to Every Notion of a Fair and Free Society.

If the Chinese don’t want the Panchen Lama he can stay with us. We’ve got plenty of room up here in our old house in . I’m sure he would get along with our kids. Most likely he’s a well-behaved little boy like every Tibetan child I’ve ever encountered, full of life and natural joy. I expect the harsh climate wouldn’t bother him. 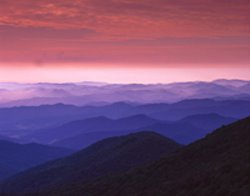 better. I know he’d like , where the Blue Ridge meets the Smokies at the corner of , , and . (Photo by Cowan Stark.) We were lucky enough to rear our kids thereabouts. Like the in , where Buddhist mystics have lived for more than a millennia, these mountains by the same name carry some mystery. nearby has been the source of endless speculation because of its mysterious lights, which every new generation of scientist has a new explanation for. The Indians thereabouts consider the Cherokee mountains to be sacred and so do a lot of others. Sleep does seem to come more easily there and bring with it magical dreams.

The best-selling novel, Cold Mountain, by Charles Frazier a few years back made a connection between the sacred mountains in and those in . It is about my favorite book since Willa Cather, and Frazier’s skill and vision successfully turns the story of a wounded old Confederate into an ancient Taoist tale. At the beginning of the book he quotes Han-shan, the 8th Century Taoist monk from China’s Cold Mountain: Men ask the way to Cold Mountain: Cold Mountain – there’s no through trail.

Surely that marks the travail of the Panchen Lama and the brave Tibetans who lived in silence in the for over a millennium when suddenly they were dispersed by Communist China. Just as their founder’s prophecy claimed: when the iron bird flies the Tibetan people will be scattered like ants across the face of the earth.

Would the continue economic ties with if a Socialist president kidnapped and imprisoned Pope Benedict and substituted their own Marxist-Leninist as Pope? I think not. But a weak and corrupt Congress turns aside, so as not to jeopardize their trade deals with the ascending world power.

I grew up in , which had 150 cotton mills shortly before I was born. My father worked in the last one to close. He was the electrician. He turned the lights out. The mills all went South to the . Now they are all going to . But the truth is, we didn’t really care where they went. When the mills left we found other things to do.

But we do care about freedom, and that is the distinction between now and then. Our mills came from , to , and on to the South in a journey of free and fair trade. But this is different. is a dictatorship. It is a totalitarian country. And the boy monk who has gone missing should be the symbol of that critical distinction.

Give the factories. And send the Panchen Lama to the Land of the Free.
Posted by Bernie Quigley at 5:44 AM

You've got a great blog here! I found it whilst I was looking for articles on dog obedience to include on my website: http://dog-articles.com.

Feel free to drop by sometime and have a look.

You can get now a days best Web marketing Manchester services with affordable price.