The Rise of Sustainable Incompetence 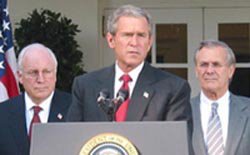 The picture of Muhammad with a bomb for a turban (which took less than 10 seconds to find this morning in a Google search) is unlikely now to send the Danish cartoonist up for a Pulitzer.

I heard the Danish king or prince or something on BBC trying to put the situation into perspective. In a free society, he said, the king or the government has no control over the press. Nice of the royals to join the discussion. Thanks for sharing. But I kept being reminded of an old Monty Python skit in which John Cleese put antlers on his head saying that when the antlers were on his head he was speaking for , the Wood Spirit, otherwise he was just talking regular. The antlers kept going on and coming off and in Python fashion, the discussion kept switching from the Wood Spirit’s cosmic visions to cheese and parrots. Most writers, artists and musicians know that they do what they do to territorialize the world and find their place in it, and they do what they do because they can’t do the math and are poor sword fighters. A point made by the very down-to-earth poet Kurt Cobain, in fact. And the best of them know as Kurt did, that everything is connected, from the king’s work to the clown’s. Nevermind.

Last week when I posted an essay here on Wesley Clark and included part of his “State of the ” speech I received over 150 visits to my blog in the next two days. Usually I receive only four or five visits a day. And they are still coming. I’ve never gotten so many responses to an article. It shows what a need there is for a new direction.

It is The George W. Bush Political Phenomenon which has brought this out, misguided from the very first and intentionally deceiving a free people. In a vast federation like ours, people have few anchors and are easily deceived – sometimes, like recently, willfully deceived. I’d been watching General Clark for a long time - since before Kosovo, as his relationship with the Army very much reflected what was happening in our country as a whole. Historical periods start at the end of a war – ours started in 1946 – and then they stabilize and develop patterns of power until they reach a plateau and a condition which I call Sustainable Incompetence.

They then begin to form management patterns which always affirm the prevailing wisdom. To do so they must then dispense with all the honor, strength, creativity and intelligence which built them in the first place as it destabilizes the prevailing orthodoxy. William James has written about this in religious organizations but it is the same in politics.

Sustainable Incompetence eventually pervades every culture of management, be it academic, journalism, business or otherwise. The United States Army was a Petri dish for this model. In Sustainable Incompetence, the man or woman of the highest integrity and greatest ability is always the first purged when the management culture starts to descend. Post-war character began to enter its full arc of ascending creativity around 1982, the time of the publication of In Search of Excellence by Tom Peters, a book heavily influenced by an almost mythical fighter pilot, Colonel John Boyd. Around 1994 or 1995 management started promoting incompetence and purging excellence and character.

According to this theory, around the 60th post-war year the culture will elect as President its most incompetent agent, but it has already long been spiraling in a downward trajectory. (Eisenhower thought Nixon too lightweight a character for VP; Nixon thought the same of Bob Dole – we are descending the stairs.) That would be President Bush the Second. I remember his father, who should have known better, when he said at the election of his son to the Presidency that it reminded him of John and John Quincy Adams, the second and sixth Presidents. There was a subtle and probably unconscious presumptuousness to it which instead brought to my mind Louis XIV and Louis the Last.

This current President could conceivable be remembered in history much along the lines of Wilhelm II, pseudo-German and pesky grandson of Victoria, who hated his own English people (as George hates New England, but he is not a real Texan or Southerner, no?) and longed for the glory of Teutonic manliness, with plumes and sword in hand on horseback (“Real men hunt with swords,” my kids say today.) Nobility takes on caricature when honor dies.

When Bush brought up his strategy of “preemptive foreign policy” it echoed Wilhelm II’s language, which so distressed the Germans, that it changed the course of their national election the following week. Wilhelm’s net result was to coalesce latent hostilities of old Christendom into alliances which brought complete disaster to the world for 30 years and brought on a destruction of Europe so great in scale that the Europeans are just now finally crawling out of the wreckage. Any number of advisors from both ends of the political spectrum could have and did predict the results of Bush’s first actions in – including Wes Clark, Brent Scowcroft and Gary Hart.

The steps ahead were predictable – guerilla warfare, civil war, a pan-Islamic, global anti-Americanism. Now they are even surpassing predictions. Issues took a seismic jump with the election of Revolutionary leadership in and again recently with the democratic election of Hamas in .

In his late writing, Leo Tolstoy pointed out that if you travel south in you will find that Orthodox Christianity blends and becomes Islam in the South. There is no place of real distinction. (Ancient sacred music shows this as well). These two forces are related much as Catholic and Protestant Europe are related. (And thus, in Europe’s Old Soul - before Peter the Great moved to Westernize and went to war on Islam, they were cultural relatives).

That will team with in opposition to the West is now a distinct possibility. This week President Vladimir Putin has sent a clear warning to the West. This possibility is heightened now by Western incursion into Russia's near frontier since 1997, which some of the greatest foreign policy minds, such as George Kennan’s, called “ . . . a mistake of historical proportions.” It is not all George Bush’s fault. Susan Eisenhower led a movement against this, but 90 Senators voted for it and Vice President Al Gore – who speaks out now in opposition to Bush - led the fight to expand ’s reach into ’s back yard. But by 1997 Sustainable Incompetence was reaching its apogee. We would no longer listen to our most distinguished statesmen or our great generals or their daughters.

John Eisenhower, son of our greatest general since Lee and Grant, has also spoken out. A life-long conservative, he switched parties in this last election to vote in opposition to Bush and the apparent neocon agenda. But for Sustainable Incompetence to reach its objective, it is absolutely necessary for honor and excellence to be purged. And three of our greatest and most honorable military heroes today have been systematically spurned and discarded in the rise to incompetence.

The first was Wesley Clark, purged by a populist army intent on a war with Islam long before 9/11. The second was John McCain, who after sustaining years of torture in enemy POW camps, was called a coward by Christian Right politicians who never fired a shot in anger and never wore the uniform of their country. And third, the man who in our time perhaps best represents in its brightest light and with its truest instincts, Colin Powell.

Bush’s first problem today is that he never served in warfare although he apparently supports warfare as a tool of enterprise and policy. I think we should consider real military service a requirement for anyone who seeks high office. There is nothing like the quiet of a 10-year old hootch girl who was selling you rancid ice cream just ten minutes before; now with a still chest so flat to the ground & her head blown off by an unseen assailant trying to kill you or somebody else. It stays with you. It quickens the intellect and the moral initiative and matures them together throughout adulthood. Such an experience would bring perspective in a political leader seeking war a second time.

Had Bush served when he was young and was expected too he would have learned at an early age what kind of a man he was.

This is the problem today with all of the President’s Men, Rumsfeld in particular. (Don’t lets hear now how brave he was flying T3s around or wherever as a ROTC officer twix and between and .)

These men had every opportunity to serve in war and every opportunity to avoid it. We know what Bush was doing. He was drunk. And this should not be allowed to be turned into pop-culture and revival-tent salvation: “I was drunk, but now I got Jesus!” It is time to talk straight and leave salvation to the Oprah show. There should be instead psychological testing for anyone who wants to be President. I’m glad the President has sobered up, but psychologists and Alcoholics Anonymous tell us that alcoholics often switch one obsession for another, quite often a religious obsession. Perhaps he missed some of the 12 steps.

Vice President Dick Cheney, who told Washington Post reporter George C. Wilson in 1999, “I had other priorities in the ’60 than military service,” probably set the record for deferment. He showed real promise as a lineman. Promotions of men like Cheney to such high office are the classic symptoms of Sustainable Incompetence.

I think history will go back and look at two men together, Cheney and Powell, who worked together early in their careers and who both have long service in government. And we will see ’s destiny following in the path of these two lives. But which path will it take? The path of honor or the path of expediency? Powell was shamefully and publicly purged by Cheney, but I believe he will be back.

In a large federation like our own, the will of the people is hard to change. It is like a big Destroyer trying to turn around – but when it does turn it is fierce, as we are a fierce people because we are a new people. And when it does turn it turns again to the people first spurned; the men and women of the highest character and keenest intelligence.

My instinct is that our country is not yet ready to fail and the best will not be left behind. Wesley Clark, John McCain and Colin Powell will yet have important roles to play in our American destiny. These are men of honor and authenticity, not fancy, dress up, caricature and wish fulfillment.

When we turn we will turn to them. We are almost there.
Posted by Bernie Quigley at 8:40 AM