The war is over. We won. 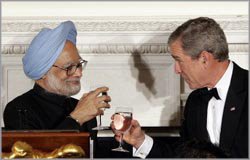 - for The Free Market News Network

Bush's trip to ascends Secretary of State Condolezza Rice's foreign policy view which she surfaced in an article in Foreign Affairs in 2000 with a vision of a multipolar world.

The “should pay closer attention to ’s role” in ,” she wrote. “ is not a great power yet, but it has the potential to emerge as one.”

Presenting as a model of religious multiculturalism, like the , is ridiculous – Hindu and Muslim in are at each other’s throats, but this is the kind of rhetoric we have become accustomed to in the last five years from these people, who apparently learned public posturing and hyperbole from their arch enemy, the old .

Nevertheless, it seems a fairly reasonable approach to the real world. The Bush administration now seems to admit that and exist in the world as something other than a bunch of Foreign Devils. They have now officially come out of denial and begun to abandon neocon notions of a "second American century" which can be taken by military force; the notion which has fostered and promoted a vision of Armageddon and brought forth this war on Iraq with Evangelical fervor.

Apparently that philosophy has now been abandoned and with it perhaps the political aspirations of the Christian Right have been abandoned by the Bush administration. Bush is and always was only a fellow traveler with the Christian Right. At heart he is really a Yankee sincerely impressed with the deep-feelings of regular religious people in his new home in . is not like that. But he is not one himself. He is more like the New York ad executives who retire or get fired and move up here to the mountains with their Parachute money and buy old run down Yankee houses and grow awful-looking chin whiskers and don old shirts in hopes of getting their picture taken standing tall and looking quaint at New England Town Meetings.

The Bush administration, in abandoning the goals of the neocons and going back to a multipolar approach, shows some positive adjustment to the real world in our time. I heard his speech in and thought it wasn't bad. I know they are just hedging against , but just the same it was interesting to see a provincial man like Bush authentically interested in an exotic culture like . I’m not sure Pat Robertson feels such warmth and understanding toward worshipers of Kali, the Death Mother.

Visiting kin in this last week I got the feeling from the real people in my old neighborhood – that would be the foothills of the Blue Ridge thereabouts - that the war on is over and we won. From beginning, to average people from the heartland that grow soybean and listen to Johnny Cash and readily serve when they are called to duty, this has been a war of vengeance. And the assault on and Saddam Hussein has been viewed as a revenge kill, as was a revenge attack for the death of Custer, the Long Hair.

Such was the call on September 12 - avenge the deaths of 9/11.Go in there and kill a bunch of them and come home. Saddam Hussein in the dock today brings the end game. And truth be told, outside of the Beltway and the Ivory Tower, it doesn't really matter that much if goes to civil war or not, because we don't really care what they do. They are not us. They are the enemy in this war. And they always seem to be at war, no? If not the English, the Russkies. The 9/11 atrocities have been avenged and now we can get back to business. In my old feed store in they have under glass at the counter a picture of Barney Fife from Mayberry RFD, sitting in the police cruiser with Saddam Hussein in the back seat, under arrest. That about sizes it up.

"Victory" in will bring a new cultural paradigm in . I believe the anti-abortion ruling will move swiftly now and positively, growing in impact and upheld in the Supreme Court. If not, another "states rights" challenge will come to challenge Roe v. Wade and be more successful. This is the kind of legislation which comes at the heels of victory in war. It is positivist in outlook and might be called Victory Legislation. Like the Revenge Kill (and the sacking of Atlanta was the price of Southern secession and Hiroshima and Nagasaki the price of Pearl Harbor), it is primal psychology and it helps determine war’s aftermath: If you win the war, as we did in WW II, you get a baby boom, happy face tv like The Dobie Gillis Show and family-oriented fare like Ozzie and Harriet. If you lose the war, as we did in , you get abortion, homosexual marriage and Lillith, Adam's mythical other wife, eating her babies. The Harvard event which ended the short and unhappy academic career of Larry Summers has lifted the lid off the nihilist cultism which is the humanities on ’s campuses, a 30-year legacy of the failure in . That will change now.

Recently, Republicans in Congress have shown a readiness to go after the President on the torture issue, where 90 Senators supported John McCain, and on the port issue. It may be then that the middle is coming forth now within the Republican Party. Also, it looks like Hillary will not be able to resist running for President. She has 17 million in the war chest, she is speaking all over outside of and , and last week she hired James Carville to raise more money. The more she raises, the worse it gets for the Democrats. They will take this cash as a sign of support, but it is only the same support from the same generational constituency amplifying the provincial generational view by giving more. And it will further engender the Revenge Demon wing of the Democratic Party, alienating mainstream, moderate and generous-minded Democrats like Wes Clark and Mark Warner.

The Republicans now might be able to find a good mainstream candidate. McCain, opposed by the Republican Right Wing, could now get the nomination perhaps if he wanted it. A candidate like governor Mitt Romney, or governor George Pataki could unite North and South and marginalize the Religious Right. And I think the fanciful notion of Condi Rice v. Hillary put forth by born-again old hacks is fading from public imagination. Condi Rice seems too sensible and competent a professional to enter into such novelty politics. And she could have a longer and larger historical role in an ascending Republican dynasty. In a race between George Pataki vs. Hillary, the Republicans will win all except the .

In the near future Bush’s war on will bring success because in spite of the fact that the execution of the war was a complete disaster, he himself brought forth the primal deed. He felt the victory at the "Mission Accomplished" moment and that is all he cared about. And that’s what plays in the heartland whether they like it or not in the Ivory Tower. But he couldn't end the war that he started, he still can't and he won’t.

It doesn’t matter. Condi has given him an out. He can ignore now and turn East. And that is where the new millennium begins. Engaging and the East in a positive and effective way will give him a successful presidency. It was engaging and the ascending Asian economic Tigers as important economic allies - not the collapse of the Soviets - which brought a prosperous in our time and gave Reagan a successful Presidency. And in hindsight, it was reaching out to Marxist-Leninist at the peak of revolution, which gave Nixon his most important moment as well. This is a third step in that legacy and in many ways an auspicious step.

It is a fact of life that the centuries and millennia begin on even numbers. When they go back and list the 100 best books of the century past they start at 1900, not 1897. Likewise here. No one will remember what happened in 1997 or 1989. The century began at 2000 and its first event was 9/11. The future began with the Bush presidency. The rest is shadow.
Posted by Bernie Quigley at 8:10 AM