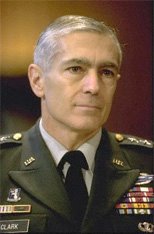 General Clark states: President Bush continues to attack critics of the war effort as “unpatriotic” - but I refuse to stay silent. The war in Iraq was a strategic blunder from the very beginning. And the Administration's handling of the war has only gone downhill from there.

Furthermore: An internal government report recently obtained by the New York Times and published in an article this past weekend confirms that “80 percent of the marines who have been killed in Iraq from wounds to the upper body could have survived if they had had extra body armor.”

The Times report continued, noting that “such armor has been available since 2003,” but the Pentagon declined to supply it to the troops despite “calls from the field for additional protection.”

More than 1700 American troops have died during combat. And according to the Times analysis, as many as 300 deaths could have been prevented if our soldiers were equipped with the right kind of body armor - armor that costs as little as $260 per set.

Posted by Bernie Quigley at 6:46 AM