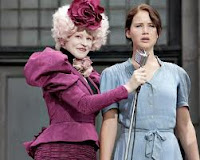 The gods hide in low places, they used to say, meaning the simple truths are everywhere apparent and can be told in the simplest tales. One such tale is The Phantom of the Opera, best watched with children or grandchildren. Joel Schumacher's 2004 version featuring Emmy Rossum and Gerard Butler is the best. This story has been told a dozen times and will be told again. Possibly nothing tells of the death of Europe like this tale. Worth seeing again because since the fabled fire in the opera house Europe has not recovered. Likely now it never will. It is replaced by varied economic zones which all strive to be the same and which now, with Germany dominant, are required by law and regulation to be the same. And to be more like Germany. Today, instead of Europe we have stylish, modernist, economic zones which are heading instead to a nowhere land like that of District 12, the home of Katniss and Prim in the tale of committed love and liberation, The Hunger Games. But that which was once Europe no longer really exists.

The question today is does China still exist? Or is it, like the Pamen of The Hunger Games, just a sequence of economic districts on which the world’s entire economic life and livelihood depends?

As China edges up today to a new leadership fight, the Washington Post is correct to ask whether a purge is going on and the expulsion of neo-Maoist Bo Xilai portends a new leadership fight. At the victory speech of Hu Jintao on the 60th anniversary of the People’s Republic, on which occasion Hu dressed in Mao suit, it should have been asked whether there is really any “China” left to advance.

Taoists, who brought the dragon spirit to China up to six thousand years ago are today being pulled off the streets and thrown in prison with the quiet compliance of the western press and American state department. Elderly Chinese women of the traditional devotions even find their way into my life to seek help to get their families out of jail.

Suzanne Collins, like Neil Gaiman and Hayao Miyazaki, brings psychological depth and mastery to her task which a rising young generation has long been familiar with. The rest of the world will catch on Friday when The Hunger Games opens nationally. Intrade posts a 90% chance that it will gross over $100 million on opening weekend.

Is there any dragon left in China, any tiger remaining in the Jewel Heart of Buddhism? But maybe Collins’ blockbuster is meant to send a reminder to us and not to those realms gone to history already, as Katniss’s District 12 is said to be Appalachia, the last place on earth still with the faith to fight for its life.
Posted by Bernie Quigley at 10:56 AM