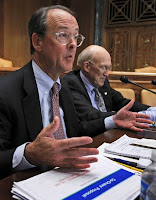 President Obama’s invitation to Bush family members to the White House makes him seem an Everyman; all things to all people, and Caroline Kennedy’s open letter to vote for Obama a second time because her name is Kennedy, both mark the turning of the times, and suggest that Obama, like the Kennedys and the Bushes, is no longer a rising part of the times. We have left the age of two family politics, honoring Northeastern gentry who bask in Kennebunkport or Hyannis, and have entered instead into a full-bore Jacksonian heartland awakening. Tea Party has taken the mantle these past two years. But Jacksonian populism, channeled today by Gingrich, Sarah Palin, Ron and Rand Paul, all started in Virginia with Mudcat Saunders.

This new Jacksonian wave brings a most auspicious beginning. It awakens a new generation of politics; the first new wave in the new century. It could bring Elizabeth Warren, Tom Brady loyalist and Massachusetts’ own Okie grandmother, to the White House in the future, and Erskine Bowles to the governor’s chair in North Carolina in 2012. Public Policy Polling says that Democrats “will have a better chance at winning the North Carolina Governor's race now than they did yesterday no matter whom their candidate is this fall. But one potential candidate really rises to the top: Erskine Bowles.” Bowles, with assist from Dave “Mudcat” Saunders and Steve Jarding, authors of “Foxes in the Henhouse: How the Republicans Stole the South and the Heartland and What the Democrats Must Do to Run ‘em Out” could now find a path.

Jarding and Saunders helped Mark Warner win the governorship in Virginia, sponsoring NASCAR stock cars and bringing in The Stanley Brothers. This was not the anti-South, self-hating liberalism which has sapped the spirit of Virginia. Warner’s liberalism demanded fiscal responsibility and economic health and progress. It was liberal politics which sought the center, not that which rushed to the edges; one that families, hillbillies and hunters could feel comfortable with. Warrior-scholar Jim Webb, supported by General Wesley Clark, followed, to remind Virginians that before Ronald Reagan, they were Democrats. The same spirit shortly rose in North Carolina with Senator Kay Hagan. They go to church, watch the Super Bowl, serve in the armed forces and honor those who do.

Bowles would be a prodigy of Warner’s creative model of governance in this rising era. Simpson-Bowles was a heroic effort and Bowles and Simpson were heroes just for one day. Warner was a strong supporter. Bowles could well run now in opposition to a weakling Congress, a failed “super committee” and an ineffective Presidency.

Bowles and his folksy sidekick, Alan Simpson, former senator from Wyoming, brought an old school voice of country authenticity to a time of discontent and confusion, not unlike the voices of Sam Ervin and Howard Baker during Watergate proceedings. It gave sudden clarity to the issues and gave the possibility of a safe recovery and an auspicious future, if only we had the courage and common sense of these two. He could build bipartisan support on this in North Carolina.

The Raleigh News and Observer reports that Bowles and Simpson want to keep the pressure on Congress as they tour the country giving speeches about their deficit plan.

"I think the future of this country is very, very bright if we face up to our problems," Bowles said at one event.