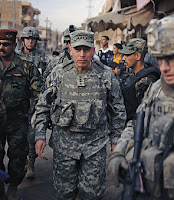 And now for something completely different: Petraeus/Jon Huntsman 2012

Newt Gingrich’s samurai moment brought a turning. Bloomberg’s Al Hunt said it came right over the plate and Gingrich hit it out of the park. Matthew Dowd on Betty Liu’s Bloomberg report gave a succinct analysis: If Gingrich, who had the crowds rising to their feet in the week’s earlier debate, could rally and dominate in the first five minutes he would have it and he could turn the entire election. That would be the most important moment – the historic turning event – that would change everything and possibly send Gingrich to the presidency. And it came as easily to Gingrich as Tom Brady’s 45 - 10 victory last week over the Mile High Messiah. They said it couldn’t be done, but even women voted for him. Consider that the Gingrich resurgence in South Carolina is not a bump but a birth pain.

I wish New Hampshire, which claims in song and story to have a mind as clear, hard and strong as granite, still had the spontaneous and instinctive gut South Carolina has, but we don’t. Which is why New England today is barely a shadow or reaction to real, organic events rising in the heartland (Occupy the anti-Tea Party, Elizabeth Warren the anti-Sarah Palin). Our primary is irrelevant now: We are North Massachusetts.

But South Carolina still brings it with a rebel yell; they have not lost themselves to the geist and the degenerate gods and golems of mass communications and that horrible music that poisons the air in every mall and grocery store in the realm these last hundred years (Huxley warned of this). And Gingrich has awakened again that which has been sleeping in the earth for a century.

In contrast, Mitt Romney was eating birthday cake at the children’s table and singing happy birthday to South Carolina Governor Nikki Haley. Timing could not have been worse. Hey, I checked her birthday horoscope in Chicago Tribune, significant perhaps on the first day of Aquarius: “Work hard today to bring a wild idea to life.” Eating birthday cake with Mitt Romney? And this: “Do your research, because you'll want this thing to hold up to scrutiny and review.”

Could Gingrich beat Romney? Possibly he already has. And there is no question in my mind now that Gingrich could be named President in 2013. Yes, he could beat Obama and those who say he can’t are like the unfortunate sad eyed John King of CNN, the priests selected by the elders to accompany the conquest, not watching the astonishing thing that is rushing to the front right before our eyes right now, but hoping to preserve the patrons of the past and the old temple.

Gingrich is a revolutionary and there are two authentic revolutionaries in this race, Gingrich and Ron Paul. Gingrich takes the day. He could beat Romney now and Obama. But it is too early for a Gingrich revolution or any other kind, although he has the classic profile of the trickster who starts revolutions. It needs more time to simmer. It will come, but not today and Gingrich will not take the presidency.

But General David Petraeus could in a brokered convention.

The New York Times reports on Saturday that cadets at The Citadel, who generally speak with a united conservative voice, are torn this time between Romney, Gingrich, Santorum and Ron Paul.

The old temple will pitch the usual suspects; Mitch Daniels, Chris Christie, all surrogates for Jeb Bush. They are already. But how would the Citadel cadets feel about David Petraeus?
Posted by Bernie Quigley at 6:19 AM