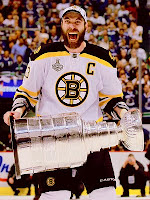 Pimco’s Bill Gross, leery of the wobbly American fundamentals told Bloomberg recently they are looking for new investments, mentioning Canada, Germany and others. The Canadian banking system is solid, there have been no bailouts, and the Canadian dollar has been growing strong against the American in recent years. But uh-oh. Something happened in early summer. What happened? The Vancouver Canucks lost in the Stanley Cup final to the Boston Bruins.

Perceptive FOREX blogger argued that the currency’s impressive rise was belied by fundamentals: “It seems the gods of forex read that post; since then, the loonie has fallen 3% against the US dollar alone. Based on my reading of the tea leaves, the loonie will fall further over the coming months, and finish the year below parity.”

Or possibly the hockey gods knew what would occur on June 18 when Canada, uncharacteristically confident that they would win, lost to Boston. Since then the graph for Canadian dollar conversion to American has bounced around like a lie detector graph for a liar.

It is a problem when national identity is so closely linked to sports as Canadian psyche is to hockey. Hockey is in Canada, as one commentator astutely says, a “national religion.” With such intense identification a sports victory or loss can have the same psychological effect as a military one.

When Canada took home the gold in both men and women’s hockey in the Winter Olympics of 2002 I compared the win to Nelson’s victory at Trafalgar in 1805. As Richard Nixon once wrote, England got an extra hundred years of history from three hours at Trafalgar. Making the Canadian victory sweeter was the presence of the dour American Vice President, Dick Cheney, basking in the contempt he awakened in almost everyone in the world outside the Bush administration, to remind the crowd of the obsequious “Miracle on Ice” – a make believe moment in the Jimmy Carter presidency when the Soviet Union lost to America in an Olympic hockey game. The addled American mind, worn to a thread by Vietnam, conjured a real victory against the Soviets. A summer reading of Henry Kissinger’s “On China” gives the cleared picture. It was America’s linking with Mao’s China that blocked off future growth for the Soviet Union. As George Kennan had advised, if the Soviets could be kept from expansion it would collapse internally. And it did barely a dozen years after the Nixon/Kissinger initiatives. It had nothing to do with hockey.

Canada might have gone through a cultural renaissance since their great 2002 victories, gaining confidence in dealings with both the United States and Quebec. But Nixon left something out: Yes, Trafalgar, but what if Napoleon had came back 10 years later and beat England into the ground at Waterloo? The tune would be different. England would not have gotten its next hundred years and there would be no Victoria, no Beatles and no Stanley Cup because there would have been no Lord Stanley.

Too early to tell, but if the 2002 games were Canada’s Trafalgar victory, they would have needed a win like the Duke of York’s victory against Napoleon at Waterloo this year in Boston to rise to a booming Canadian Century like that predicted. But something celestial was going on. The presence of a giant before the Bruins’ net should have been the tip off. And Canada did not get its victory.

The FOREX blogger may have it. Not that I would advise Bill Gross or Pimco on this. I’m just saying.

Posted by Bernie Quigley at 5:50 AM