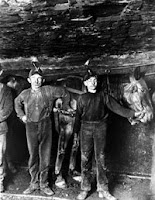 There was a time – before Starbucks, before Bill and Hillary, before the Rolling Stones – when liberals supported working class people. No longer. But back then no one represented the strong and fearless heartbeat of American working people like West Virginia coal miners. They were the stuff of legend chronicled in folklore, bluegrass and folk music. In the ‘50s we’d listen in pained silence for word about mine disasters even way up here in New England. We shared in the lives of the miners. If they could find the strength to survive in the mines we could survive on the surface. They were the canaries of our own desire. No longer, as the recent occurrence at Sundail, WV, makes clear.

The signs say it all: “WV Miners Say Go Home Tree Huggers.” Storm clouds appear to be gathering above the Appalachian coal country because of “the slap heard round the cornfields.” What happened, according to AP reports, is Cordelia Ruth Tucker, wearing the fluorescent-striped shirt of a miner, strode past West Virginia state troopers and into a stream of marchers protesting mountaintop removal mining to deliver an audible smack. “The 54-year-old Rock Creek woman isn't talking as she awaits trial on a battery charge,” says the report. “Her neighbor, environmental activist Judy Bonds, says she was on the receiving end of the slap.”

Tree huggers vs. coal miners is an advanced historic theme which began in the mid-Sixties. Then it was hard hats vs. hippies. The papers and news magazines were full of it; pictures of white – always white – construction workers with lunch pails wearing hard hats adorned with American flag decals scornfully watching hippies pass by. It was the time of the three wizards: Ira Einhorn, Jerry Rubin and Abbie Hoffman – dead or in jail now (Einhorn, for murdering his girl friend). As it is with wizards, they inspired others to their labors and these three – icons of the counterculture (Einhorn was co-founder of Earth Day) and hippie movement – found armies including Presidents and Vice Presidents.

The generation which rose from this had many names. They/we were only one generation away from factory, field and mines ourselves most of us. But as the Senate votes this morning on a monumental piece of leisure class entitlement legislation like we have never seen before and very likely will never see again in our country, John Kenneth Galbraith’s phrase coined in 1992, “the culture of contentment” might be the best.

The hard hats v. hippies moment was much like this miners v. tree huggers moment but the incident at Sundial comes at a different point in history. A time when the culture of contentment has reached its endgame. And a time when an amorphous tax revolt in sweeping the heartland. The tax revolt is a movement looking for an agent, looking for a spark. And it so happens this past week that the conservative, libertarian-leaning Tea Party movement is more popular than either the Democratic or the Republican parties, according to the latest NBC News/Wall Street Journal poll.

MSNBC reports that the Republican Party maintains its net-negative favorable/unfavorable rating in the poll, with 28 percent viewing it positively and 43 percent seeing it in a negative light. For the first time in more than two years, the Democratic Party also now holds a net-negative fav/unfav, at 35-45 percent.

By comparison, the NBC/WSJ poll shows the Tea Party movement with a net-positive 41-23 percent score.
Posted by Bernie Quigley at 5:09 AM

A great article indeed and a very detailed, realistic and superb analysis of the current and past scenarios. I would like to thank the author of this article for contributing such a lovely and mind-opening article.