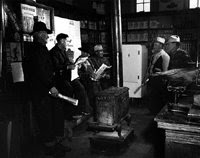 
This has been the year of the chicken coop I was told in my rural hardware store across the river in Vermont. Everybody’s coming in for supplies to buy chicken coops. Some from the city and there have been an increased number of elegant Porsches and the new BMWs around town, coming in to buy chicken wire and two-by-fours. A new wave perhaps of city folk going rural as characteristically happens up here every 20 years or so.

And there are chickens everywhere. The Murray McMurray mail-order kind which arrive peeping at the local post office and are the first delights of people going rural. Once you’ve tasted your own home-grown egg you never go back to the store bought kind. People are getting self sufficient. Saving money as well and not spending.

This could well be a symptom of the declining economy. But this is year two of the return and the economic turndown only snapped last September. Last spring the retailers sold out of wood stoves and the gardening shops sold out on seed potatoes and onions in the first few days. So people started preparing for the turndown six months before it turned. Potatoes and onions; the most fundamental symbolism of basic food stuff, which with a gun, could provide you with squirrel stew all through the winter. Or chicken stew or moose.

Speaking of which, they are selling out on guns as well.

“I’ve been in this for a long time, and I can’t say I’ve seen it as much across the board like now,” Wayne Barros of Barrows Point Trading Post told Chris Fleisher of the Valley News. “On handguns and ammo, not even close.” This in a temperate New Hampshire town on the border of pacifist Vermont where you rarely ever see a gun in public.

“It’s because of Obama,” Ernest Welch, co-owner of Welch’s Gun and Gift Shop told Fleisher. “He’s going to take the guns away.”

It is indeed a phenomenon that is happening in heartland states across the country to a greater degree than it is up here.

But that doesn’t account for the squirrel soup. Why have people been buying up potato and onion stocks from a year before when it seemed likely that Senator Clinton might be President or John McCain and Obama was just a twinkle in Oprah’s eye?