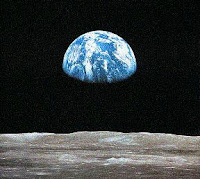 Back to the Moon: Neil Armstrong is the First Man of Aquarius

The epochal journey of Neil Armstrong, Buzz Aldrin and Michael Collins like three men in a boat to the moon in a mission named for the sun god Apollo would mark the great change in July, 1969. The primal dance of Woodstock spontaneously materialized into a world celebration less than a month later. The moon has always tracked and haunted the earth; dogs howl, oceans rise. In Tibet, when the shadow of the earth completes its passage across the moon in an eclipse, the towns celebrate victory over the demon that walked across the moon. Maybe Woodstock was such a celebration.

Norman Mailer described the interior of the VAB [Vehicle Assembly Building] which built the space craft as “the antechamber of a new Creation.” He dubbed himself Aquarius for the telling of the tale of the flight to the moon in his book Of a Fire on the Moon. And in the spirit of the day, the LEM module, which was used as an escape devise and saved the lives of astronauts on the troubled flight of Apollo 13, was named Aquarius.

It was a shift in the plane of consciousness from earth and sea to air and fire. In Aquarius, we are all sky walkers, not just Luke, Lieutenant Ripley, Captain Kirk and the remarkable hybrid of mother and machine from one of the last Star Trek spin offs, Seven-of-Nine. The phrase was commandeered by the hippies but as novelist Robertson Davies once pointed out, that was misdirection. Aquarius is an age of Titans. This age will belong to the sky walkers.

Comfort level with air and space did not come easily and for some it has not come at all. And not all remember it the same. One of the networks was asking recently what were you doing when we landed on the moon? But not everyone remembers it as Ron Howard and Tom Hanks do. When did PBS use the moon landing in a fund raiser? Never. Woodstock? Annually.

For 40 years we did not go back to the moon. But last Thursday NASA sent up a pair of unmanned probes that will help find landing points and camp sites in years to come. It is prelude to an effort to return to the moon by 2020.

Perhaps the heroic achievements of the Apollo astronauts were necessary for it to be realized in our minds as possible in the first place. The astronauts were travelers not only to the moon but to a new condition of human consciousness. Psychologically it was, as Armstrong said, “. . . one giant step forward for mankind.”

Earthrise, seeing the earth rise above the lunar horizon from the moon, would change how we saw ourselves in the universe, wrote mythologist Joseph Campbell, much like Columbus’ journey materially dispelled mediaeval notions that the world was flat. The change would manifest itself in the culture -- the world culture -- at one very precise moment, and history can look back and look forward from that moment.

Today we go back and we are not alone. Russia, China and others have ambitious plans to return to the moon and head out from there to Mars. But not everyone is on the bus.

Mars is not the kind of place where you'd want to raise your kids, wrote Washington Post columnist Anne Applebaum in a 2004 essay titled, Mission to Nowhere.

“Nor is it the kind of place anybody is ever going to visit, as some of the NASA scientists know perfectly well,” she wrote. “Even leaving aside the cold, the lack of atmosphere and the absence of water, there's the deadly radiation.”

I think we still have those silvery space suits for stuff like that. And helmets.

You’re either on the bus or you’re not on the bus, as hippie guru Ken Kesey said at the time of the Apollo missions about something else.

Armstrong, appropriately pegged “First Man” by author James Hansen in his well-received biography, First Man: The Life of Neil A. Armstrong, would disagree. In 2005, his Wiki bio reports, Armstrong said that a manned mission to Mars will be easier than the lunar challenge of the 1960s.

Armstrong also recalled his initial concerns about the Apollo 11 mission. He had believed there was only a 50 percent chance of landing on the moon. "I was elated, ecstatic and extremely surprised that we were successful,” he said

Schmitt has long argued that the cancellation of the Apollo program in 1972 was a costly blunder. Michael Griffin, the head of NASA who was recently replaced by President Obama, agreed in a March 2007 paper. If NASA had stuck with Apollo technology rather than opting to develop the Space Shuttle, we could have expanded the Skylab space station and gone to the moon twice a year and with incremental improvement the system could have gone to Mars.

“If we had done all this,” Griffin wrote, “we would be on Mars today, not writing about it as a subject for ‘the next 50 years.’”

The Space Shuttle program may have brought 30 years of flying in circles when the technology was ready and the astronauts were ready for higher ground. But we, the people, were not ready. We were not yet ready for space and the moon and Mars. Maybe now after 30 years of tutelage from Obi-Wan Kenobi and Dr. Spock we are.
Posted by Bernie Quigley at 1:11 PM