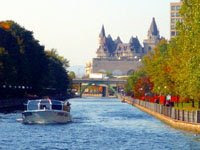 Holding the G-20 meeting in London cripples the negotiations from the start. Such an important meeting, to be more than a geriatric ruling class façade, should recognize the rising economic powers in the world. They will determine the future of capital and the fate of globalization. Otherwise, it will be doomed to failure. Already, the leading European nations have indicated that they will ignore the advice of the Anglos. Globalization began in London as a blood and guts journey of world conquest. Everyone remembers.

Likewise, they should move the UN. At a UN summit in September, 2005, Venezuelan President Hugo Chavez proposed that the UN should move out of New York. He was right, it should. Some of us here in New England made that same point a few years ago at the beginning of the war on Iraq.

If they want to hold these meetings at the top of economic power, they should start holding them in Shanghai. But state and world capitals should not be placed at the top of power.

A nation’s capital or a world economic capital is, or should be, a mandala – a benign vortex of varied and different countervailing forces which in their entirety make up that world. Washington, D.C. was the perfect “benign center” between the industrial North and the pastoral and agricultural South in the colonial period but lost that positioning with the opening of the West. The “little lumber town” of Ottawa was the proper center for Canada, which consisted only of Quebec and Ontario when Queen Victoria declared it the capital in 1857. It too was centrally located at the center between two regions with vastly different sensibilities when the large western cities of Vancouver and Calgary were nonexistent. Today Ottawa, with a statue of Victoria on one side of the river, and one of the fierce and formidable Maurice “The Rocket” Richard on the other, forms a harmonious balance of opposites.

The UN could learn from this scenario and so could the G 20.

New York City was a terrible place for the UN to begin with. Placing a capital at the seat of power dictates down, making it an authoritarian Empire. No question, New York was the capital of an American global economic empire in the post-war world. It might have been better to make it a temporary Authority while the rest of the world, much of it in ruins, got back to strength. But once the world was on its feet again and fully empowered, the wise view of Victoria and Washington, finding the benign center between strong forces, should have prevailed. New York City is a pocket of influence and is susceptible to looking out for its own kind. London is worse. Authoritarianism is innate in situations like these and breeds contempt.

The world we face ahead without question, is an East/West world; one delicately balanced between the burgeoning Asian economies, India and China in particular, and the West.

This is where the millennium begins. Its center – the center of the world ahead - is the Lakes Region, and in cities like Detroit, Toronto, Chicago or Windsor, Ontario and Ottawa.

Canada, with its great humanitarian military general and senator Roméo Dallaire on the ground at Rwanda, was the voice of one calling in the desert in a complete failure of leadership and will by the U.S. even greater than that today in Iraq and Afghanistan.

Since its onset, Canada has shown itself to be a better world citizen than the United States or England and its banks are the envy of the world in an era of turmoil.
Posted by Bernie Quigley at 6:48 AM