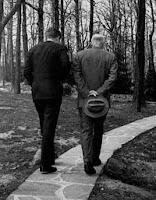 
If you look at it on a road atlas, America today resembles a star in the center of the world with the center in Indiana. It is because of the patterns of the roads and it only got like that at the end of the big war. Eisenhower built the roads so that Jack Kerouac could travel without interruption from New York to Denver and all the way to Los Angeles and up to San Francisco. And there he found things we, as Americans, had never seriously considered before; Taoist monks like Gia-fu Feng in California and jazz musicians like Charlie Parker and Dizzy Gillespie in the smoky denizens of the night on the road.

Gilbert Millstein, who reviewed Kerouac’s On the Road at the New York Times said: "Just as, more than any other novel of the Twenties, The Sun Also Rises came to be regarded as the testament of the 'Lost Generation,' so it seems certain that On the Road will come to be known as that of the 'Beat Generation.'"

This was Kerouac’s America but it was Eisenhower’s as well because Eisenhower built the American roads for him. It was an awakening moment and they awakened it together, because prior to it, when Americans looked out if they ever looked up at all, they almost always looked backward in time to Europe as Hemingway did. Today we stand in Indiana or Chicago and look to all directions; East, West, South and the Great White North. From that we have become a different people.

I bring it up now because more than once this week, in expanding the Obama comparison to Jack Kennedy, pundits have grabbed on to the image of Jack Kennedy not wearing a coat and Dwight Eisenhower, at 70, wearing an overcoat, a scarf and a hat during Kennedy’s inaugural speech. This image is meant to suggest the change in generations. But before they glom on to it at journalism school and send it forth in multiple copies like Nixon suggesting the “dark side” because he needed a shave when he debated with Kennedy, it should be looked at. Because I could well see Obama as Eisenhower’s natural successor instead of Nixon or Kennedy.

Much will be said today, the swearing in day, about the President’s African roots and traditions, but Obama was reared by a fair-minded Unitarian grandmother who raised him with the original spirit of the heartland. Of any President since post-war these most formative early days possibly come closest to Eisenhower’s rural roots and his pacifist mother and his simple farm folk kin and traditions. Both Eisenhower's and Obama'a maternal line hail from Surrender Dorothy land, where the cowardly lion, the heartless tin man and brainless straw man were cured of their neuroses and afflictions by the rising, natural spirit of the earth and the Kansas child of nature.

Obama also suggests Eisenhower in his approach to solving problems. They are both drafted into service much without seeking it, and both are expected to solve a mess of problems – a world of problems - created by others who came just recently before them.

It is indeed a day of change and a change that first began at Yalta but hasn’t yet taken hold. If we look at change in our world from the American perspective we can see the world of Victoria ending pretty much at Yalta. The pivotal transition came in 1956 when Britain’s Anthony Eden attempted to stop Gamal Abdel Nasser, President of Egypt, from nationalizing the Suez Canal. When President Eisenhower forbade it, Eden famously responded, “Over to you, Ike.” This incident can be seen as the end of British dominance in the world and in the Anglo-American alliance.

The rise of Ronald Reagan sought to restore the grandeur of the old alliance without the actual necessity of it. This was in direct opposition to Eisenhower’s order to Anthony Eden and to the spirit of the Eisenhower era – not only the spirit of Kerouac and Bill Evans, but of Dag Hammarskjold, Hannah Arendt and Telford Taylor. Unfortunately, the assault on the Falklands was a long way from Nelson at Trafalgar. And as Jimmy Carter said, “I never had any doubt that we could take Granada.”

What Reagan brought was a feeling of the reconstruction of the World War II period and George W. Bush was the unfortunate book end of this experience. Bush was the son who had no experience of his own generation. He was chosen by his father’s generation to continue the old order and he willingly marched into the task.

In his first month in office New York Times columnist Maureen Dowd wrote, “He (Bush) said he never liked the Beatles after they got into that ‘kind of a weird psychedelic period.’” And ten weeks into his presidency she reported going hungry for a shred of modernity. “Bush II has reeled backward so fast, economically, environmentally, globally, culturally, it’s redolent of Dorothy clicking her way from the shimmering spires of Oz to a depressed black-and-white Kansas . . . What’s next, Asbestos, DDT, bomb shelters, filterless cigarettes? Patti Page?”

America under Bush has resembled Spain under Generalissimo Franco. Time had stalled, and the old world even with eerie overtones of 14th century Crusades, had managed to sustain and reinstall itself. But today it ends.

And that is the cause of the celebrations in Washington today and as far away as Kenya.

The world can awaken again. The witch is dead.
Posted by Bernie Quigley at 7:29 AM