. . . thoughts on Remo Roth blog, Unus Mundus RE Twilight, Lost and how cultural beginnings are recalled in the cycles of history

So long as there is power there will be power cycles. William Strauss and Neil Howe’s excellent book on generations well outlines post-war power cycles. The second post-war generation is inevitably marked by spiritual renewal, much as the Sixties bought the first generation past the big war to new spiritual origins. Henry James’s The Bostonians reveals a similar culture in the Boston region late in the century and William James’s book, The Varieties of Religious Experiences, became the text book of modern psychology. ON the continent came the rush of Orientalism; Yeats, Khrishnamurti, Madame Blavatsky at the same time.

The Strauss/Howe view is based on the archetypes; one generation opposes the last and takes its values from the one before. This was observed by Roman historians and Taoists. The post-war cycle ends in the 60th year. And after 20 years of war and wanderings, a new cycle begins. Likewise the “spiritual renewal” period occurs every 60 years. As the antithesis of war and chaos.

And when this begins people naturally come to look at things they avoid or keep subliminally at other times, like astrology. When they do they look to beginnings. This constant 60 year cycle forms a “natural history” which transcends all cultural changes like war and revolution. It has the effect of immortalizing beginnings of astrological cycles. People will always look to the beginning of the Platonic Month. I happened to notice yesterday a picture of the Christ as Anima Mundi in Tarot cards surrounded by the four elements. For two thousand years astrologers looked to the beginning moment of Pisces; year 1 Pisces, or zero. There were the three magi and the birth of the Christ. Likewise, through history ahead, year 0 or year 1 Aquarius will be fettered out. That will be year 2000 and 2001.

It is possible to see now that will be seen as “awakening” Aquarius as the birth of Christ awakened the Age of Pisces. This will be prominent in the popular and naïve culture (culture not designed by academics, institutions’ or professionals; culture that is unselfconscious). We start with The Matrix and go on to the Tolkien Trilogy which was showing in movies (air and electricity = Aquarius). Harry Potter can well be seen as the Aquarian; the earth shaman who precedes the pre-Newtonian mechanistic view of Calvin. He even come s with a “generationa shadow” – Captain Jack Sparrow; earth and water, the yin elements of the zodiac. IN the recent Lost series Ben (identified as the Piscean Christ in the second season) actually goes to the North Pole where the earth is aligned to the North Star and turns the turnstile; changing the age from Pisces to Aquarius (John Locke is acknowledged by Richard Alpert [which was the name of Ram Dass, Timothy Leary’s colleague at Harvard] a Taoist immortal as the Aquarian leader). Lost and the Survivor TV shows are “returning to earth” myths like the crop circle - virtually flying saucers on the ground - see Returning - indicators imply.

I believe this transition ends/begins with Twilight; it is the first vampire movies – vampire movies are “silence of God” or “empty crypt” myths – in which the Undead – people from the Unconscious – are the “Shining Ones” – this is a “return of the gods.”

The next “spiritual” cycle like the Sixties or the Khrisnamurti/Yeats/Blavatsky period will be about 2025. We are now with the economic crash at the end of the post-war cycle. Nothing can retrieve it. Things will continue to break. The “pilgrim” generation which renews the world – as explained by Strauss and Howe – is only about 13 years old – this is the audience of 25 million for Twilight. (Note: the “Greatest Generation” which ended German fascism and rebuilt the world under Eisenhower was only 9 years old at the beginning of the Great Depression in 1929.)

In this light the year 2012 should be interesting. I noticed on a CNN briefing yesterday that the Aztecs prophecy was actually given contemporary credibility by a scientific discovery. IN the 1950s scientists discovered that that the Sun will be aligned with the center of the Milky Way in 2012. The scientists in the article used this to declare that the Incas “knew nothing about this” and thus could not have made a prediction through their technology and systems of thinking. But obviously it is a synchronicity.

In any case, when the origins of the Age or Aquarius are recalled it will constantly recall the events and culture of the years 2000 and 2001 over the millennia, just as the birth of the Christ is recalled and immortalized today.

Incidently, several of what can be considered "Aquarian" culture "move" the source; Dali, in The Temptation of St. Anthony" moves it from Rome (Vatican) to a desert which appears to be Texas and a Buddhist monk in "The Second Coming of Christ." Jung, sees "another Swiss" (Self) in Liverpool - a here the British (Anglo) empire flips from Extroverted to Introverted as it did in Rome - the external empire merely in time the casing for the spirit empire to follow (Toynbee suggests this as well; in history, he says, yang turns to yin over time). Ben in Lost switches the "island" to someplace else. In Twilight, Seattle is the home of new awakenings and where the gods hatch. I get most of this from my young daughter but from what I understand, all vampires are simple those who exist in the Unconscious or who have an actual inner life. They may be seen as Templars. In this Twilight venue the last cycle are the Voterie, Roman Italians in a clear reference to old school Roman Catholics. The vampires go to Italy for retreat. But everyone does, no? Is like a magnet. 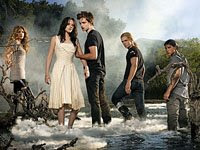 Posted by Bernie Quigley at 5:35 AM