John Bunn, an old photographer friend of Barr Ashcraft, has passed along this thought about

how he met Barr. For people who knew him this is characteristic Barr. I can hear his voice in this letter. If anyone else has any stories they would like to pass along I will post them on this blog. There will be a service for Barr at Northfield Mount Herman, Barr's high school in northern Massachusetts, on April 29 at the chapel at 3 pm. Details should be check with Winnie Ganshaw at the school (winnie_ganshaw@nmhschool.org). 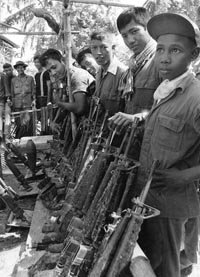 John wrote: We met in Luang Probang, the royal capital of Laos, in the summer of 1973. As I recollect, we met on the street, where he asked me if I knew of a reasonably-priced place to stay. Barr had left Vietnam a few months earlier, but carried a rather nasty bout of hepatitis with him, from which he was still recovering. (For a while he had been bedridden, stomach swollen, either in southern Laos or Thailand.) Of course, he couldn't drink any alcoholic beverages and probably didn't trust the water, so he was drinking only bottled soda. He stayed at the same "hotel" (flophouse) as I, but in a slightly better room.
I too had recently been in Vietnam and would be returning. When I discovered that he was a photographer, I expressed interest in doing some stringing in Vietnam. He said, "Let me ask you a question. If you were doing combat photography and had to choose just one lens to use, which would it be?" Facetiously, I replied, "500, 1000 millimeter, maybe even larger." He said I was going in the wrong direction and that a 35mm would be best. Then he explained how he often likes to frame his subject up close and then bring the rest of the picture into focus so that the result takes on a third dimension. He went on to explain that one of his best combat shots was of an ARVN firing from behind the corner of a building. Barr got right up behind him so he was looking down the barrel of the soldier's M-16 out toward the enemy. From that moment on, I had a better understanding of "depth of field" and an appreciation of its importance.
Later in our travels together he told me about a photo he took that graced the cover of Life (or was it Look?). During the Easter Offensive of 1972, Barr and a number of other photographers were shooting a wrecked ARVN tank in Quang Tri Province. They all took the same picture, but it was his that was selected for a cover. Why? Because he dropped down low, possibly on his belly, and composed the picture from a slightly different perspective. In passing on the tips of a professional, he suggested that I always be looking for better ways to frame a picture: shoot it higher or lower than eye level; get closer or, occasionally, farther away; determine whether the subject is better suited for a horizontal or vertical take; and usually bring your landscape pictures to life by iincluding people in them.
We flew from Luang Probang to a border town on the MeKong River, crossed over, and made our way to Chiang Mai, Thailand. This was a homecoming of sorts for Barr. He returned to the site of his first published photograph: a shot of a Thai youngster in mid-air, just after he'd let go of a still-swinging rope and just before he plunged into a pond. During the days we wandered about taking pictures and enjoying our carefree days. In the evenings we retired to the outdoor food stalls and, while conversing and observing our fellow travelers and the locals, lingered for hours over scrumptious Thai fare. I believe that it was during this time that he told me of his encounter with the recently-departed Bruce Lee.
Barr was an extra on a Bruce Lee movie set. During a break in the shooting, Bruce dropped down and did 150 push-ups. As soon as he finished, Barr dropped down and knocked out 200. Not to be upstaged, Bruce hit the floor and did 250 more. Barr stayed on his feet. He knew his limits.
During our few weeks together I learned more than I ever had about the art of taking decent pictures. Whenever I receive a compliment about my photography, invariably I'll say, "You know, once I traveled for a few weeks with this professional photographer and since then . . . ." Also, since our days of feasting and talking in Chiang Mai, I've been a slow eater, savouring the taste and texture of my food, enjoying and becoming more aware of my surroundings.
"I don't remember our parting in Chiang Mai or whether we saw each other again in Bangkok. I do know that we must have exchanged addresses and phone numbers, because years later we would get together again in Amherst. I'll save this story for another time, though.
Posted by Bernie Quigley at 2:23 AM

I came to Taiwan from Viet Nam in 1971 to study Chinese. In the International House, I met an Australian my age, Phil, from Japan, who was very excited that his photography teacher, Barr Ashcraft, was coming. Barr taught me a lot about photography, always emphasizing, GET DOWN! GET DOWN!! When he expressed an interest to photography in Viet Nam, I introduced him to my mother, Ruth Talovich, who was working in Saigon. Barr went, and you probably know the rest. But the cover photo was Life, not Look.
We kept in touch after he left Viet Nam, but I lost track of him years ago. It is good to have news of him, even though it is sad news.