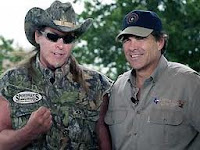 The fey and the faint hearted continue to wish for a day or a month without Sarah Palin, but like the grass roots religious fervor of the Harp with a Thousand Strings, she continues to sing the robust “people’s music.” “WTF?” As Pundit’s Blog commenter Liz writes, the rustic brawler and warrior of the Tennessee frontier, Andrew Jackson, well compares to the Alaskan governor Palin. “What she lacks in political correctness, she makes up in relevance. Her comments reminded me of the "Don't touch my junk" statement by Joe Sixpack regarding airport security. She speaks in the blunt, contemporary shorthand of our new Twitter world.”

The Beatles have landed. Change is here. If you go back to The Beatles Chronicles you can see in the tapes the same FCC-approved commentators announcing that the fad is over now on their second tour; the mop tops are finished. But they weren’t; they were just about to hatch. Nor is it over for Sarah Palin, the Tea Party and the “Constitutional Conservatives.” It is just beginning.

There are today a number of conservatives desiring to be President but there is reluctance to enter because of advanced marketing issues: Their problem is like that of the major recording studios in the 1960s – they had Bob Dylan in the hand but refused him the contract because they were still stuck on Perry Como. But that which comes today through a glass darkly, will soon – very soon – become clear. There has been about as much commentary on Palin’s WTF Twitter as on Obama’s SOTU speech (“ . . .out of touch,” “not enough to save this presidency,” Dick Morris).

But subtle shifts: Mike Pence out, not a Tea Partier. Paul Ryan good, but not Tea Partier. Newt Gingrich teaming with Jeb Bush. Conservatives stuck on Bush; lost in a mediocre personality cult worse than the Clinton and Roosevelt Democrats. Mitt Romney, having won passage of individual mandate in 2006 in Massachusetts when it was constitutionally noncontroversial faces an election when 26 states bring a landmark historic challenge which some are comparing now to be as pivotal as Roe v. Wade in 1973. Not going to work.

The Tea Party brought this historic challenge and this day of change. Suddenly, the brave are not lonely. There can be no realistic doubt in the minds of conservatives today that the Tea Party actions and the state sovereignty initiatives of the last two years and the new Constitutional awareness and willingness of ordinary Americans to stand up and deliver has changed America. The future has plopped itself into the laps of Republicans and they demure.

There are only two potential champions of this new direction at this very moment, Sarah Palin and Rick Perry. The Republicans need to draft Rick Perry. He is a master orator. He was brave when it was time to be brave and with South Carolina Governor Mark Sanford, was the very first governor to oppose Obamacare spending, even before the Tea Party awakened. He is the best governor in America. And he can beat Barack Obama in 2012.

Like Bob Dylan and The Beatles, this is a generational issue. Palin and Perry are the avatars of the new conservative movement – a new political and cultural generation – and the Republicans have a choice similar to that which the Democrats faced in 2008 with Barack Obama. They could go back to the 1990s with Bill and Hillary or go forward into the new century with Obama. The Republicans today can go back to the 1980s with George H.W. Bush and Co. or go to America’s future with Palin or Perry.

Not long ago, Perry told Fox he would definitely not run for president in 2012. He should be drafted.
Posted by Bernie Quigley at 5:44 AM