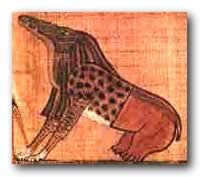 In final Lost of the season, Astral Locke enters the foot of the colossus Ammit to have Ben Linus kill Jacob. It is necessary for Jacob – the spirit of the passing age – to die so that the new age can awaken. The Lost series is a parable of descending age of Pisces and the rising age of Aquarius. Linus has in several ways been identified as the Piscean; in second season and fifth he receives the “Christ wound” – a wound in the right of the chest where the Christ was speared on the cross – Christ is the Piscean in lore of the zodiac (the Magi were Persian and Zoroastrian astrologers following the star to greet the opening of the age). Ben = “Son” in Hebrew. Linus is “Son of Apollo.”

In this episode on the way to the foot of Ammit Ben actually tells John Locke he is Pisces. The foot, where Jacob lives, is the body symbol of Pisces. Lower leg, which Locke is always breaking, signifies Aquarius. There will be 12 avatars in the full cycle of the Egyptian temple – Anubis is seen on the walls as well – in the 24,000 year cycle of the Sun. Jacob – a Hebrew name suggesting the first patriarchs out of Egypt – and his “leader” Ben/Son is the first. Astral Locke is the second; Locke, the name suggests the Enlightenment, is the Aquarian. He is Astral because he is really dead and his body is delivered to Richard Alpert (Ram Dass). Dual nature is key to all J.J. Abrams work. The Platonic Months – 2,000 year intervals – alternate yin and yang or Introvert and Extrovert. Pisces was a yin age. Aquarius is a yang age. Some say the alternating nature is Jesus/John, the Twins which accompany the change, seen in Lemuria as Sanat and Sanada.
Posted by Bernie Quigley at 1:59 PM

So much of interest here; Juliette is Earth Mother archetype - she has travelled from the sky to the earth and BACK INTO THE EARTH restoring a five hundred year path to the sky which began around the time when Michaelangelo cast the Mother aside in scorn to have the Christ rise alone into the sky. "Lost" is a "returning to earth" myth as UFO movies in the 1950s were "rising to space" myths - "Lost" could be the saving myth of our times as the Michaelangelo passage divided Child from Mother and divided the human race from the earth. Juliette has returned us to our only home and our mother, earth.

Actually, Ben is a sagittarius. His birthday is december 19th, as seen in "The Man Behind The Curtain". He was just lying when he said he was a piscean