"It may be that some little root of the sacred tree still lives," Black Elk.

Of all the garden variety secession movements springing up today in North America, from Quebec Nation to the Republic of Texas and up to the Bear Republic of California then back again to Vermont and the Free State initiative here in New Hampshire, Lakota Nation is perhaps the most interesting.

The Argus Leader of Sioux Falls, South Dakota, reports that Lakota Indians, led by activist Russell Means, announced a plan recently for their people to withdraw from treaties their forefathers signed with the U.S. government. Lakota Nation seeks recognition for their effort to form a free and independent Lakota nation. The new nation is needed, the report said, because Indians have been "dismissed" by the United States and are tired of living under a colonial apartheid system.

None of these initiatives have a change of success unless leads the way. Texas is already Mexican except for the rich oil people; Vermont will one day speak with the français in Acadia again; the Bear Republic will succumb to the Asian horde and the Russkie will stomp out the Newfie seperatists with one big boot now that they have planted the flag at the top of Canada. But the Lakota Nation is something else. It is a Ghost Dance. It is a spirit long thought dead - killed in slaughter at Wounded Knee - a spirit that suddenly awakened in the mid-Sixties and as Chief Joseph said, it is a spirit which will always walk among us. puffy L.L. Bean jacket succumbs with the loss of his hedge fund, derivatives and pension plan pegged to the falling dollar. Already he has no cousins or aunties. His religion is a dictatorship. His house is square and made of glass.

Lakota spirit lives in a round house, and as Black Elk said, Lakota lives therefore, “like the birds.” Lakota spirit will always be and it is everywhere. We name cars after it and states and movie stars. We call the name of Indian warrior spirit in battle. And most real Americans who have lost the Euro history like to claim to being "part Indian."

And Lakota Nation is, as Black Elk, the great Lakota shaman and prophet said, pointing north, “. . . the center of the world.”

And right now it actually is as the Mississippi River divides the world today uniting the U.S. east and west and all of the Eastern world and the Western world into one world.


Today, we see a reversal of Kipling’s maxim: East is East and West is West and never the twain shall meet. Now, East and West, like the recently-photographed 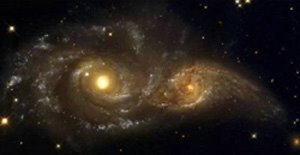 galaxy known as IC2163, swinging counterclockwise past its celestial partner NGC2207, appear to be about to form into one unified solar system. Now they cannot be kept apart. It almost appears as if history was waiting for this moment to bring these two forces together in unity. An ancient spiritual force from the East and a new-to-history technical force in the West, as the Dalai Lama generally expressed it recently.

These two forces could not have come together at any other time in history. Nor could they have flowed together into a unique new culture at any place other than the North American continent.

is the Aquarian continent, made up of all the world’s peoples, castes, races and religions, pouring freely in, as the water pours from the vessel of the Titan. And its epic tale, Huckelberry Finn, identifies the vortex, the . The water pours freely over the falls at Niagara to the sacred lakes of the Manitou, the

Great Spirit, into thereabouts and down the to where the Amish flourish, on to the sacred primal place of Elvis’ Graceland and out into the .

This is the Aquarian mandala, which will find creative energy in centuries ahead. This means the development and enrichment of regional cultures on the North American continent, forging one another, helping one another and hating one another; forming new dynamic relationships and creating a new world.

We come together in a federalist state. With federalism, everyone is equal, but no one is connected. This is the Hamiltonian model of federalism and it is singularly responsible for how we have developed since 1776. favored a vast, singular state with a central government to aid and abet industry and the business class. Thomas Jefferson envisioned instead a series of autonomous regions, each with their own provincial culture and life force. The way is temporary, and once we are all here and found the place meant for us, we will stay here and grow here to our own Peoples, as envisioned a free society.

As Revelation closes the gate for one epoch which began its historical march in Rome and , the American Indian visionary opens a gate to the next. Here Black Elk is the perennial guide – from Cooper to novelist Charles Frazier -- for Natty Bumpo/Hawkeye the new arrival on this continent who has lost his orientation and is wandering with a sick soul in the desert of the new world. Here is Black Elk: “And the Voice said: Give them now the flowering stick that they may flourish, and the sacred pipe that they may know the power that is peace, and the wing of the white giant that they may have endurance and face all winds with courage.”

The recent novel Cold Mountain with its Indian guide is representative of the journey of the spirit as it unfolds on what still is a new continent and in what is surely a new age. As Bunyan’s

Christian pilgrim sought a life of the highest integrity and moral perseverance in a world torn asunder in the 1600s, so Frazier speaks to us today in Cold Mountain. There are two , one in where Taoist sages and hermits have lived for ages, and one in , considered sacred to Indians in those parts. At the beginning of the novel Frazier quotes the eighth century Taoist sage, Han shan: Men ask the way to . : there’s no through trail. It is a mandala novel; it begins with the character on a broken edge of a circle, but with an Indian guide in a brief but perfect life he finds his way to the center, whole.

Like Natty Bumpo, Frazier's hero finds wholeness and completion in the house of the Indian. It is the oldest and youngest of American stories. And it speaks well of the North American journey, a journey for all here which is just beginning.

The rabbis tell us that the gods hide in the lowest places. When I was a child we were told a story about a Texas lawman who died in the desert and was brought back to life - "born again" - by an Indian shaman. But he could not remember his name. He lost his history. And he no longer had Jesus but an Indian to guide him in the desert between East and West.

Each week we white folk were asked the important question: "Who is the Masked Man?"

We are the Masked Man. Our identity not yet revealed, even to ourselves.

Anonymous said...
This comment has been removed by a blog administrator.
10:44 AM

Anonymous said...
This comment has been removed by a blog administrator.
9:56 AM