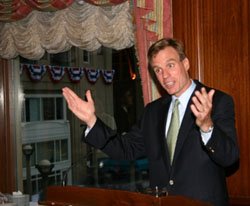 I don’t know if you all get it – maybe it is a regional thing. We have up here on occasion recently, visits of those considering a run for the Presidency in 2008. It is aired on C-Span as “Road to the White House.” Got that rural, church basement New Hampshire cache – not unlike an Iowa or Nebraska church basement, but way unlike something in New York or Washington, D.C. Mark Warner, the governor of Virginia, was up here last week for a visit and we were surprised by his gracious and naturally friendly temperament, more Indiana than Virginia, he seemed to us. He made the comment that a few years back he ran for the U.S. Senate against Senator John Warner and there was a bumper sticker which said, “Mark, not John” which some thought was a biblical reference.

I happened to be in the region at that time and was a grim place in parts of the hinterland. Out of somewhere in the mountains thereabouts came an indigenous feeling that the world was coming to an end and if you turned on mountain radio you’d get the greatest and most sincere blue grass and folk preachers, but taking a dark turn somewhere around 1992 - a feeling that after all this time, Jesus comin.’ Armageddon pervaded the country air. At the time Senator John McCain, a Virginian whose ancestors served with George Washington was called a coward by the burgeoning religious right, which was even then looking for a fight.

Warner represents the which Washington, Jefferson and John McCain would be proud of. First impressions of Gov. Warner were much like those when I heard him last Spring at the Governor’s conference on education – he is an American wide-awake guy who sees everything like most of the awake see it (as it it right in front of our face) – hey, India is putting out twice as many engineering students as we are – how are we supposed to be competitive? Why don’t we start in the high schools and get them oriented there?

Makes perfect sense. But as the current administration looks to the Middle East for all things and with the wiggiest of ideas to “jump start a new American century” and pretend and are not in existence, Warner sees the real issues at home and across the Pacific. Its about work and its about management and he proudly calls “the best managed state in .” Perhaps because the rest of politics is either negative or in denial, the contrast Warner presents is so positively charged.

I believe Warner could well change the tempo of American politics, much as Ronald Reagan changed the prevailing wind in the 1980s. His responsible voice in a Democratic primary – which last time almost resembled a political edition of American Idol – will entirely change the tone. He doesn’t seem to have a negative bone in his body – refreshing when I get daily emails from several other Democratic contenders consistently attacking the Republicans – they know who they are not, but they don’t know who they are.

Mark Warner knows who he is and you get that right away. Herewith is the man from the heartland; Indiana born – slightly disheveled like Frank Capra’s Mr. Deeds and not unlike John Roberts – very much like John Roberts in a sense. There is a sense of natural competence and optimism about him as there is with John Roberts which is neither partisan nor ideological, neither North nor South but thoroughly American, and an assurance that the job ahead will naturally open up to him and he will meet it as he was born to it. Like John Roberts, that his is a whole person, competent, formidable, one of us – as Bono said about Johnny Cash, “extraordinary and ordinary” – this it the free American condition awakening in the heartland, awakening in the world and sayin’ hey.

Up here in where surly pervades the mountains, the governor brought charm and humor – the first Democrat perhaps with an organic sense of humor since JFK. “ . . . if they can build it in , they can build it in .” “. . . the Democrat Party has to be something more than against the Administration."

Warner’s could be the voice for new movement, for a new Awakening in the Democratic Party and in the country. A true family man, he loves the political crowd, but seems itching to get home to his wife and three daughters. The curse of the new Democrats is a Starbuck’s class culture, a phony “upper working class” quality which alienates them from ordinary folks – Patsy Cline, Hank Williams folk like most Virginians. There are none of these pretentions about Mark Warner. , but he makes no distinction – he sponsors gun legislation in a state with an honest tradition of hunting and promotes his agenda at the NASCAR track. He will play well up here in . More to come.

Thrill your kids with a PERSONALIZED LETTER FROM SANTA postamarked from the NORTH POLE! Visit **SANTASMAILBOX.COM** to order yours now!

Fruitful blog. I favor your site and I shall
return to it! I go to sites like this when I get the
chance, and find blog just like this.
I was in love with your blog site.